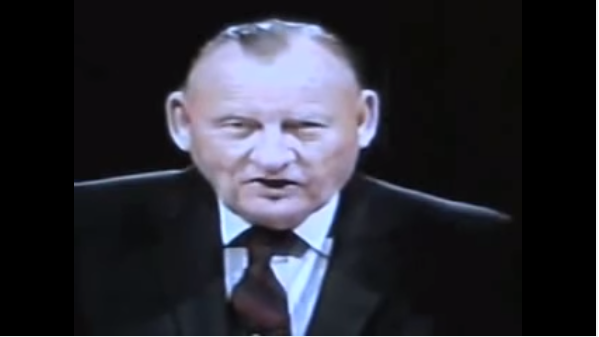 7/12/2016 JENNIFER LECLAIRE  charisma news
Jennifer LeClaire is now sharing her reflections and revelations through Walking in the Spirit. Listen at charismapodcastnetwork.com.

Lester Sumrall went home to be with the Lord in 1996, but his legacy continues—and his God-breathed prophetic words are still alive.
In a 1987 video capture, Sumrall, whose spiritual father was Smith Wigglesworth, shares seven prophetic insights God revealed to his heart earlier in his walk with the Lord. I wish they weren’t accurate, but it seems he heard rightly. You can watch the video to see all the warnings. I’m going to focus on just one of them.
“I said, ‘God, I don’t understand this at all.’ He said, ‘You’re going to see it and here are seven things to watch.’ And God gave me seven things to observe. Number one was, America will depart from its historic faith. Now at that time, the Supreme Court hadn’t done any of those strange things, such as permission to kill unborn babies and giving such rights to homosexuals. See, none of that happened.”
None of those things had happened when the Lord first spoke to Sumrall but many things have happened since. The man of God received these revelations before Roe v. Wade, before the Supreme Court decision to sanction homosexual marriages and before the growing persecution of Christians in America. Indeed, conditions have grown much worse since Sumrall first heard the Lord speak—and since he released these prophecies.
Departing From the Faith
Sumrall pointed to this Scripture in his teaching: “Now the Spirit clearly says that in the last times some will depart from the faith and pay attention to seducing spirits and doctrines of devils, speaking lies in hypocrisy, having their consciences seared with a hot iron…” (1 Tim. 4:1-2).
JOIN JENNIFER ON FACEBOOK FOR SPIRITUAL COMMENTARY AND ENCOURAGEMENT. CLICK HERE.
We’ve certainly seen this happen. Numerous high-profile Christians have turned from Christ to trumpet atheism. Numbers of others have come out as gay. Entire denominations are rejecting sound Bible doctrine for fear of offending people or because the spirit of the world has deceived them. And who knows how many others have backslidden and are on the edge of the Great Falling Away?
At the same time, we see end-times theologians insisting the Lord is coming back soon while engaging in heated debates over when that will happen, if there is really a rapture, and other things we probably won’t know until we see it with our eyes. One thing is certain: Jesus will not return for a church without spot or wrinkle unless the falling away comes first … (1 Thess. 2:3). We don’t have to agree on all the signs of the times but we shouldn’t ignore the ones that are clear. And the Great Falling Away, at this point, is clear. It has started.
Believing the Devil’s Lies
We’ve witnessed more than one man of God with a major ministry platform bow a knee to doctrines like universalism, deceiving and being deceived with this deadly heresy. Despite many in the church lifting their voice against heretical teachings, these deceived ministers hold fast to their demonic doctrine.
We’ve also watched famous pastors speak lies in hypocrisy—lies that left many hurt, wounded, and disillusioned—and yet they remain adored and adorned in the megachurches that made their name great. Clearly, the conscience of some influential church leaders has already been seared with a hot iron (1 Tim. 4:2). Some have become the proverbial blind leading the blind.
The Bible tells us to work out our salvation with fear and trembling (Phil. 2:12). We need to get at it because this is sure: Jesus is coming back for a glorious church without spot or wrinkle (Eph. 5:27). I believe the spots and wrinkles will fall away before His return. The gates of hell are trying to prevail against the church and will ultimately fail, but not before enticing some believers into heresy, idolatry and other sin.
I don’t believe in once-saved, always-saved doctrines. I believe you can lose your salvation. I don’t think it happens overnight. I think it’s a slow progression down the slippery slope of deception. I often ask people who are deceived this question: “How would you know if you were deceived?” I’ve never met one who was deceived find an answer for the question. Rather, they insist that they cannot be deceived or that they would know if they were. If we don’t think we could be deceived, we’re deceived already. And if we are deceived, we wouldn’t know it unless the Holy Spirit broke in and opened the eyes of our heart.
So is the Great Falling Away already underway? I believe it is. We’re seeing full-blown apostasy in the church. We need to be watchful and pray. I pray that the Lord would count me faithful, that I would not be deceived in these last days, and that I might be a pure vessel the Lord can use to sound the alarm. What about you?