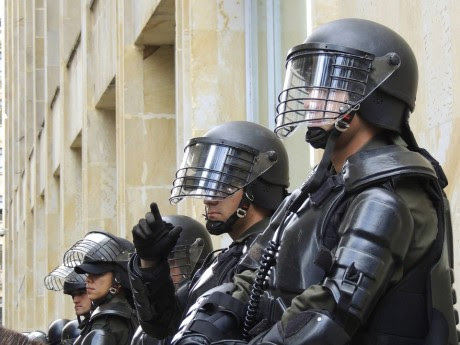 War On The Streets Of America: Protesters Attack Police Officers In Major Cities All Over The Nation
Posted: 10 Jul 2016  Michael Snyder  THE ECONOMIC COLLAPSE BLOG
This is what a nation looks like when it starts melting down from within.  A series of very disturbing incidents of police brutality against young black males has caused a firestorm to erupt all across the country.  You would have thought that the massacre of police in Dallas would have caused everyone to step back and reflect on what is really causing this cycle of violence, but instead the nationwide protests have gotten even bigger and more intense.
Over the weekend, protesters attacked police with rocks, bricks, bottles, fireworks, chunks of concrete, Molotov cocktails and rebar from a construction site.  In return, police fired pepper spray, smoke bombs and tear gas at protesters.  As I write this, more than 200 protesters have been arrested over the weekend so far, and authorities are bracing for what the coming night will bring.
For so long, I have been specifically warning that this kind of civil unrest was coming, but I truly wish that it would have turned out that I was wrong.  As a nation, we need to learn to love one another no matter what we look like or where we are from, but instead a cycle of violence has begun that is going to be very hard to break.
On Saturday night, there was horrible violence against police in St. Paul, Minnesota.  That is where my father was originally from, and I remember visiting my grandmother in St. Paul many times.  Back in those days, I never would have imagined that someday we would see this kind of violence against law enforcement officers in the city…

At least five officers were injured by protesters — one hit with a glass bottle and another by fireworks, according to St. Paul police. One was hit on the head with a large piece of concrete, possibly dropped from a bridge, according to police.
Another officer had been hit in the head with a rock, though it is unclear the extent of the injuries. Police say a Molotov cocktail was thrown at officers.
Law enforcement used crowd-control measures, including smoke and fired marking rounds similar to paintball rounds, said police spokesman Steve Linders.

According to another report, protesters “were dropping 10lb concrete blocks on officers’ heads, throwing bricks at their heads and genitals, and lobbing Molotov cocktails.”

One of the officers that had a concrete block dropped on his head had his spine fractured.
There is absolutely no excuse for attacking police officers in this manner.

I want to share with you a series of tweets that were sent out by the St. Paul police during the attacks…

“Person with laser sight pointing it at officers. Fireworks being fired at officers by protesters. #I94closed”

“Protesters now arming themselves with rebar from construction site. #I94closed”

Officer injured after being hit with a glass bottle thrown by protesters. #I94closed

“Another officer has been injured by aggressors throwing objects. Three injured so far. #I94closed”

“Bricks now being thrown at officers, along with more rocks and bottles. #I94closed”

“An officer has been hit in the head with a rock. Unclear the extent of injuries. #I94closed”

“Another officer hit in the head with a large piece of concrete, possibly dropped from bridge. #I94closed”

“Molotov cocktail thrown at officers. Unclear if anyone injured. #I94closed”

As I have warned before, “a spirit of violence and civil unrest is rising in America“, and it wasn’t just in St. Paul that we saw these kinds of various dangerous attacks on police officers.

-In Baton Rouge, a police officer “had several of his teeth knocked out” after being hit by a projectile thrown by protesters.  But it could have been a lot worse.  According tothe Daily Mail, law enforcement authorities confiscated “three rifles, three shotguns and two pistols” from the rioters.

-In Phoenix, protesters launched rocks and projectiles at police and many of them reportedly shouted “We should shoot you!”

Multiple gunshots were fired at the San Antonio Police headquarters building Saturday night, and police are seeking a suspect who was seen running from the area, SAPD Chief William McManus said.
The shots were fired just before 10 p.m. Saturday. There were no reports of injuries, but bullet marks were found on the exterior wall of the building, McManus said. Shell casings were discovered in a nearby alley.

The mainstream media would have us believe that the shooter in Dallas was a lone nut that acted alone, and that his behavior was not part of a larger trend.  But they completely ignored another mass shooting motivated by hate that occurred just hours before the shootings in Dallas…

Hours before a black Army veteran shot 12 officers at a Black Lives Matter protest in Dallas, another former Army soldier was accused of shooting indiscriminately at passing cars and police on a Tennessee highway.
And like the Dallas sniper, Lakeem Keon Scott said he was motivated to act in response to police violence against African-Americans, authorities said Friday.
One woman died and three others, including a police officer, were wounded Thursday morning in the Tennessee rampage, one of several spasms of violence across the country this week amid boiling tensions over policing and race.

And the incident in Dallas could have turned out to be far worse.  According to authorities in Dallas, Micah Johnson was found to have had bomb making materials in his home and “was planning a larger attack”…

The gunman who killed five cops in Dallas was planning a larger attack but launched his assault early because the protest was too good an opportunity to miss, a police source said.
Veteran Micah Johnson went on the rampage with an AR-15 assault rifle and handgun on Thursday night, but left explosive material at home.
A law enforcement source told WFAA that Johnson was ‘planning something bigger’ but cut preparations short because he knew scores of police officers would man the Black Lives Matter protest.

At times like this, we desperately need strong leaders to step forward and calm everyone down.  Unfortunately, the great leaders of the past are long gone, and they have been replaced by politicians that are trying to figure out how they can best use this unrest for their own political advantage.

I wish that everyone in the country could be made to understand this, but unfortunately most Americans have chosen a different path, and now we will suffer the consequences.

The Most Powerful Prayer on Earth – Sid Roth, It’s Supernatural