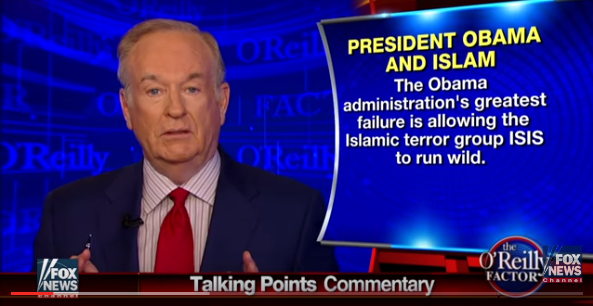 7/7/2016 BOB ESCHLIMAN  charisma news
During Wednesday night’s program, FOX News Channel host Bill O’Reilly called out President Barack Obama for having an “emotional attachment to the Muslim world” that has “hurt the United States.”
“The Obama administration’s greatest failure is allowing the Islamic terror group ISIS to run wild, murdering thousands of innocent people all over the world, including many Muslims,” he said, adding later, “Barack Obama should do what I do: aggressively call out those who abuse the Muslim faith, who commit atrocities under a religious banner. He should make defeating jihad a central issue and stop trying to diminish Islamic terrorism.”
O’Reilly said Obama’s upbringing, “steeped in Muslim culture,” and that included Islamic studies while he lived in Indonesia, has played a role in how the U.S. has addressed radical Islamic terrorism, which he said is the “central problem on the planet.” He added the president is “avoiding the simple truth”: that radical Islam is a “direct threat to the entire world.”
See the entire “Talking Points Memo” below.