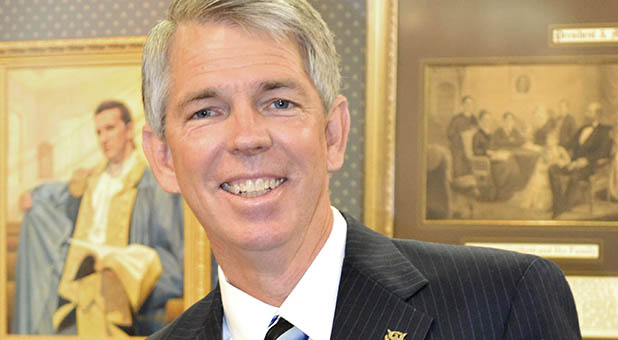 7/8/2016 BOB ESCHLIMAN  charisma news
Last week, during a broadcast of the “WallBuilders Live” program, David Barton addressed a question on many evangelical Christians’ minds.
One listener named Pat, who claimed to be a delegate to the Republican National Convention from Washington State, wrote in that he didn’t think he could vote for GOP presidential nominee-in-waiting Donald Trump. He then asked if there was anything delegates could do to stop Trump’s nomination.
Barton—who formerly ran one of U.S. Sen. Ted Cruz’ Super PACs—offered an answer the caller likely wasn’t expecting to hear.
“There’s a lot of people frustrated with Trump,” he said. “So, what do we do as Christians? There’s several things we can do. One is we can look for biblical examples, and a biblical example is you have a lot of times that God chooses people who aren’t God-fearing people to be people who really help His people.”
He pointed to the Babylonian king Nebuchadnezzar, who “wasn’t a God guy,” but was declared to be the Lord’s servant. He added that while Trump has acknowledged some Christian leanings, he hasn’t exhibited a “relationship with Christ” in the manner in which he conducts himself.
“Is it out of the realm of possibility that this is God’s guy for right now, even though he really is not a God guy?” he asked rhetorically. “The answer is ‘no.’ It’s not outside the realm of possibility.”
Barton said, regardless of who wins the election, Trump has already “busted the back of political correctness” and Americans now feel compelled to speak out about things they might not have previously.
“He’s spoken out, and he takes a beating, and people keep liking it,” he said. “The bigger the beating he took, the greater his numbers became, and the polls showed he really tapped into people being angry and tired of political correctness.”
As a result, Barton said, Trump isn’t “beat up” quite as often about his statements, because there’s an understanding that he’s got the people on his side. A “regular God guy” might not have been able to have had the same impact on political correctness.
“So that’s already one good thing that has come.”
Barton’s co-host, Rick Green, added: “So really you’re saying is we don’t know necessarily the pieces of the puzzle God is moving around here. It’s not always the piece we might’ve necessarily wanted to pick up and use, but that’s how He’s wiser than us. Who are we to say whether or not this is a Cyrus or a Nebuchadnezzar, or those kind of situations where God can still use him if he’s the nominee?”
“Well, one thing I know for sure is that in this race of primaries, we had a lot of really good God guys in there,” Barton responded. “And we had a huge turnout of professing Christians and evangelicals and others, so there is nothing to complain about about ‘We didn’t get a voice, we didn’t have a candidate.’ We had great candidates to choose from, and this is who the people chose with a really high turnout of evangelicals, so I kind of look back and say, ‘Hmmm. I wonder where God’s fingerprint is in all this.'”
Trump’s political rise isn’t necessarily a failure of the church, he added. And while he may not have been committed Christians’ preferred candidate, that doesn’t mean he may not be God’s candidate.
“We may look back in a few years and say, ‘Wow, he really did some things that none of us expected,'” he said. “So I am fully open to the possibility that because we did everything as Christians we could—we can’t complain about our turnout, we can’t complain about our quality of candidates, and this is what the people chose—I’m a whole lot more open to the fact that God may have something going here that is bigger than what we think or see.”
Barton also pointed out Trump is a successful CEO who manages a wide array of business entities, and there are very few people in the world “worth $5.6 billion.” He said the GOP nominee-in-waiting got to be successful by picking people who knew what they were doing and could get the job done.
He also said the nomination of judges is another key factor to consider. He said he was pleasantly surprised by Trump’s “short list” of 11 potential Supreme Court nominees.
Addressing the remainder of the original question, Barton said Cruz would not support any effort to derail the nomination process. And, he noted the Republican National Committee is unlikely to allow any opening for rules changes during next week’s convention in Cleveland.
“In 1 Timothy, we’re told when you’re running a race, you don’t get crowned the winner unless you run according to the rules,” he said. “That’s process. You may be a great athlete, but if you don’t compete within the rules, you won’t win.”
Instead, Barton said the focus should be on preventing efforts to change the GOP platform in ways that take it away from defending life and biblical marriage. He doesn’t think that will happen, but acknowledged there are several well-funded efforts to try.
“We certainly know that from a worldview standpoint as a Christian, Hillary’s worldview is much more contrary to where we are on religious liberty, rights of conscience, life, and traditional marriage,” he said. “So, we’ll see what happens.”