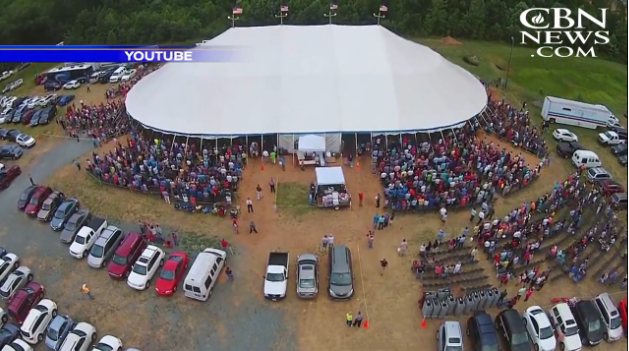 +6
The number of people accepting Jesus Christ as their Lord and Savior continues to climb at the Burlington Revival in North Carolina.
D.R. Harrison, marketing director for the revival, told CBN News around 500 people have accepted Christ so far in the last eight weeks.
D.R. Harrison talks about how his daughter prayed for his wife and him to accept Christ. Watch his powerful testimony here. D.R. Harrison and his wife accepted Christ at the Burlington Revival.
Another spokesperson said a lot of older people are giving their hearts to Jesus, people in their 50s, 60s, and 70s.
Harrison, who also accepted Christ under the ministry of C.T. Townsend, the evangelist at the revival, said people are traveling to Burlington from around the country, including from Tennessee, Pennsylvania, Georgia, South Carolina, Kentucky, and up and down the East Coast.
In addition, people are already planning to attend the revival next week, its ninth.
“We’re receiving messages from Oklahoma, Michigan, Pennsylvania, New York — people that are booking plane tickets and making plans to attend the revival next week,” Harrison said.
“All I can say is it’s just God. God is doing something in this day, in this hour that no man can take credit for, and no man can possibly fathom what God is doing in this day,” he continued. “And it’s a real move of revival that God is sending to us in the last days right before Jesus comes.”
Harrison said there has been a big increase in the amount of people watching the services online, including social media.
“It’s obviously spreading all over the country and even around the world… people tuning in from Africa and Hong Kong, Canada, Mexico; people watching through Facebook, on our Facebook live feed every night, feeling the presence of God, begging God that He would send revival to their countries,” Harrison shared with CBN News.
“We want to make sure we stay out of the way and just let God do exactly what He wants to do,” he said.
The revival meetings have been extended through July 8. The tent sits directly off the highway at 3860 Danbrook Road in Burlington, NC — just off Exit 140 from I-40.
Watch here: NC Revival
Love For His People, Inc. founded in 2010 by Steve & Laurie Martin. Charlotte, NC USA