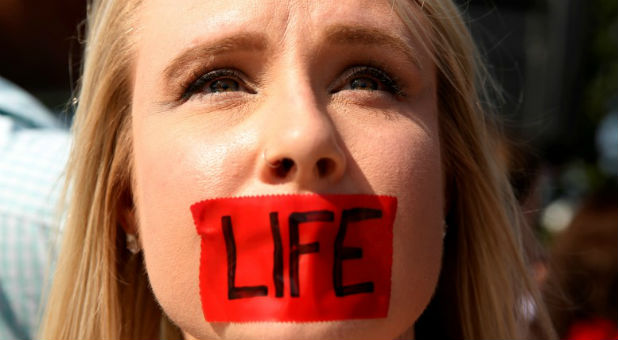 6/28/2016 LEAH JESSEN/THE DAILY SIGNAL  charisma news
Join us on our podcast each weekday for an interesting story, well told, from Charisma News. Listen at charismapodcastnetwork.com.
Members of the pro-life movement standing outside the Supreme Court on Monday were visibly discouraged by the 5-3 decision striking down a Texas law that imposed health and safety regulations on abortion clinics. But those activists showed no signs that they intend to back down from the battle over abortion in the United States.
“The pro-life generation is stronger than ever before,” Maddie Schulte, a regional coordinator at Students for Life, told The Daily Signal outside the Supreme Court in Washington, D.C. “I’m excited to see what comes next. We’re coming back full force.”
“We believe in life,” added Anja Scheib, a programs intern for Students for Life. “Millennials,” in particular, she said, “are becoming more pro-life.”
The case before the Supreme Court, Whole Woman’s Health v. Hellerstedt, involves a Texas law, known as H.B. 2. The law required abortion facilities to meet the same health and safety standards as other facilities performing similarly invasive surgeries. It also required physicians who perform abortions to have admitting privileges at local hospitals, in the event that something went wrong during an abortion procedure.
The Supreme Court has previously ruled that while abortion is legal in the United States, states are allowed to regulate the procedure as long as those regulations don’t pose an “undue burden” on women’s ability to get an abortion.
With Monday’s 5-3 decision, the justices decided that the medical benefits of Texas’ law did not justify the burdens they impose on clinics.
In issuing the majority opinion, Justice Stephen G. Breyer cited a district court’s findings that concluded enforcement of the admitting-privileges requirement forced almost half of Texas’ 40 licensed abortion clinics to shut down. If the surgical-center provision were allowed to take effect, the lower court added, the number of abortion facilities would be reduced further, so that “only seven facilities and a potential eighth will exist in Texas.”
On the basis of these findings, among others, Breyer wrote:

We conclude that neither of these provisions offers medical benefits sufficient to justify the burdens upon access that each imposes. Each places a substantial obstacle in the path of women seeking a previability abortion, each constitutes an undue burden on abortion access, and each violates the federal Constitution.

Breyer was joined by Justices Ruth Bader Ginsburg, Elena Kagan, Anthony M. Kennedy, and Sonia Sotomayor. Dissenting were Chief Justice John G. Roberts Jr. and Justices Samuel A. Alito Jr. and Clarence Thomas, who said the decision “exemplifies the court’s troubling tendency ‘to bend the rules when any effort to limit abortion, or even to speak in opposition to abortion, is at issue.'”
Monday’s decision is likely to affect other states with similar laws regulating health and safety standards for abortions. According to the Center for Reproductive Rights, more than 20 states have laws that impose health and safety standards on abortion clinics, although not all are as strict as the Texas law.
Virginia is one of them.
“I had to be here to witness this,” Rebecca Gotwalt of Virginia told The Daily Signal. Gotwalt, who identifies as pro-choice, arrived at the Supreme Court a little after 7 a.m.
“I know we’re repealing our TRAP [Targeted Regulation of Abortion Providers] laws in Virginia, so it was very important to see the Supreme Court do this on the national level, so individual states will stop punishing women.”
Supporters of the Texas law said it was an attempt to improve the health and safety standards for women seeking abortions.
The law was enacted after the 2013 murder conviction of Dr. Kermit Gosnell, a Philadelphia abortionist who is serving a life sentence. The trial established that poor health and safety standards at Gosnell’s clinic led to the deaths of multiple babies who survived botched abortion procedures, along with the death of a mother—in part because paramedics could not get a stretcher into the building.
“Abortionists shouldn’t be given a free pass to elude medical requirements that everyone else is required to follow,” Steven H. Aden, a senior counsel at the conservative Alliance Defending Freedom, said in a statement after the decision. He added:

We are disappointed that the Supreme Court has ruled against a law so clearly designed to protect the health and safety of women in the wake of the Kermit Gosnell scandal. The law’s requirements were commonsense protections that ensured the maximum amount of protection for women, who deserve to have their well-being treated by government as a higher priority than the bottom line of abortionists. Any abortion facilities that don’t meet basic health and safety standards are not facilities that anyone should want to remain open.

Opponents view the requirements as simply an attempt to abolish abortion in the U.S., and were pleased to see the law struck down by the court.
“In states across the country, we’ve seen TRAP laws shut them down,” Amber Banks, director of programs and communications for NARAL Pro-Choice Maryland, told The Daily Signal. She added:

I remember when I was in college, I interned at the local Planned Parenthood … because they had to have hallways a certain length and it mattered what their parking lot layout was. It just seemed really absurd because I know from talking to doctors and having doctors in my family, that that’s not actually the kind of things that actually keeps people safe. It was just being used to force people to give billions of dollars for renovations or shut down.

Some supporters of the law, too, saw the case as part of bigger question of abortion in the United States.
“Abortion is—to me—an issue that is so near and dear to my heart and the hearts of millions of people across this country,” Evan Stone of Louisville, Kentucky, told The Daily Signal. “It goes way beyond politics. We can disagree on taxes, immigration, whatever, but this is an issue that is central to who we are as a human civilization.”
Stone, who is interning in Washington, D.C., this summer, said he spent the night outside the Supreme Court and started protesting at 6 a.m. Monday.
“Do we believe that human life has intrinsic value or not? That is the question at heart here,” Stone said.

This article originally appeared on The Daily Signal.
Draw closer to God. Experience the presence of the Holy Spirit every month as you read Charisma magazine. Sign up now to get Charisma for as low as $1 per issue.
Has God called you to be a leader? Ministry Today magazine is the source that Christian leaders who want to serve with passion and purpose turn to. Subscribe now and receive a free leadership book.
Love For His People, Inc. founded in 2010 by Steve & Laurie Martin. Charlotte, NC USA