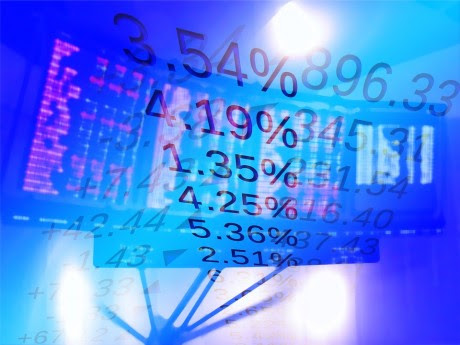 European Banks Have Their Worst Two Day Stretch EVER As The Global Financial Crisis Intensifies
Posted: 27 Jun 2016   Michael Snyder  THE ECONOMIC COLLAPSE BLOG
Over the last two trading days, European banks have lost 23 percent of their value.  Let that number sink it for a bit.  In just a two day stretch, nearly a quarter of the value of all European banks has been wiped out.  I warned you that the Brexit vote “could change everything“, and that is precisely what has happened.

Meanwhile, the Dow was down another 260 points on Monday as U.S. markets continue to be shaken as well.  Overall, approximately three trillion dollars of global stock market wealth has been lost over the last two trading days.  That is an all-time record, and any doubt that we have entered a new global financial crisis has now been completely eliminated.
But of course the biggest news on Monday was what happened to European banks.  The Brexit vote has caused financial carnage for those institutions unlike anything that we have ever seen before.  Just check out this chart from Zero Hedge… 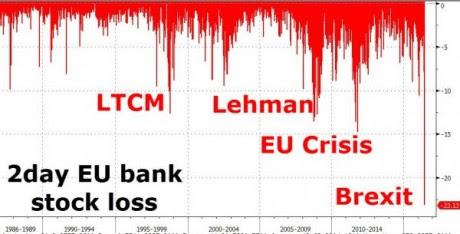 I knew that things would be bad if the UK voted to leave the European Union, but I didn’t know that they would be this bad.

Prior to all of this, a whole bunch of “too big to fail” banks all over Europe were already in the process of imploding, and now this chaotic financial environment may push several of them into full-blown collapse mode simultaneously.  Just consider the following commentary from Wolf Richter…

Healthy big banks would get over Brexit and the political turmoil it is spawning, particularly non-UK banks. But there are no healthy big banks in Europe. And non-UK banks are crashing just as hard, and some harder. This is about a banking crisis morphing into a financial crisis.
These bank stocks got crushed on Friday. And they got crushed again today. Italian banks have been reduced to penny stocks. Spanish banks are getting closer. Commerzbank, Germany’s second largest bank, and still partially owned by the German government as a consequence of the last bailout, is well on the way.

One institution that I have been warning about for months is German banking giant Deutsche Bank.  On Monday, their stock fell another 5.77 percent to a fresh all-time closing low of 13.87.  I have been convinced that Deutsche Bank is going to zero for a long time, but these days it seems in quite a hurry to get there.

Of course Deutsche Bank is far from alone.  The following are other “too big to fail” European banks that have lost at least one-fifth of their value over the past two trading days…

This is what a full-blown financial crisis looks like, and U.S. banks have been getting hit very hard too…

The Brexit contagion is spreading as USD liquidity and counterparty risk in the interconnected global financial system has reached US banks with Goldman at 3 year lows and BofA and Citi plunging over 12%. This happens just two days after the Fed released its latest stress test results finding that none of the 33 banks tested would need additional capital in case of a “severe” financial crisis. That conclusion may be tested soon.

Meanwhile, the British pound continues to get absolutely pummeled.  As I write this, the GBP/USD is down to 1.32, and some are now warning that the British pound may hit parity with the U.S. dollar by the end of the year.

One of the reasons why I expect the British pound to continue to tumble is because the global elite have to show the British people that they made the wrong decision, and they need to scare off any other countries that would consider holding similar votes.

Two major rating agencies downgraded the United Kingdom’s credit rating on Monday.
S&P Global Ratings lowered the UK to AA from AAA, with a “negative” outlook. And, Fitch cut its rating to AA from AA+, with a negative outlook as well.

And as I mentioned yesterday, Bank of America and Goldman Sachs have already projected that the UK economy is heading into recession.

As much economic and financial pain as possible will be inflicted upon the British people, and meanwhile they will be bombarded by mainstream news stories telling them that they made a stupid decision.

Hopefully the British people will stand strong and will not give in to the pressure. But of course it isn’t just the British people that will be feeling the pain.  The Brexit vote has sent shockwaves all over the planet, and global investors are losing tremendous amounts of money.  For instance, here in the United States approximately 1.3 trillion dollars of stock market wealth has been wiped out so far…

Brexit isn’t just a European problem after all. The United Kingdom’s decision to quit the European Union is costing U.S. investors a pretty penny.
U.S.-based companies in the broad Russell 3000, including online advertising company Alphabet (GOOGL), software maker Microsoft (MSFT) and global bank JPMorgan Chase (JPM), have suffered a collective loss of $1.3 trillion since Friday’s shocker from the United Kingdom, according to a USA TODAY analysis of data from S&P Global Market Intelligence.

Hopefully tomorrow will be better.  It is very rare for global financial markets to crash for three days in a row, but it could happen.  More likely, however, is that we will see some kind of temporary bounce as long as some really negative event doesn’t hit the news.

But let there be no doubt about what has just happened.  The collapse of Lehman Brothers was the “trigger event” that really accelerated the crisis of 2008, and now it appears as though the Brexit vote will be the “trigger event” that greatly accelerates the crisis of 2016.
Global investors had already lost trillions over the past 12 months, and a full-blown financial implosion was going to happen no matter how the vote turned out, but thanks to British voters the fun and games have arrived early.

Unfortunately, only a very small fraction of the population understands just how bad things are going to get in the months ahead… Whosoever will. You? – Love For His People newsletter