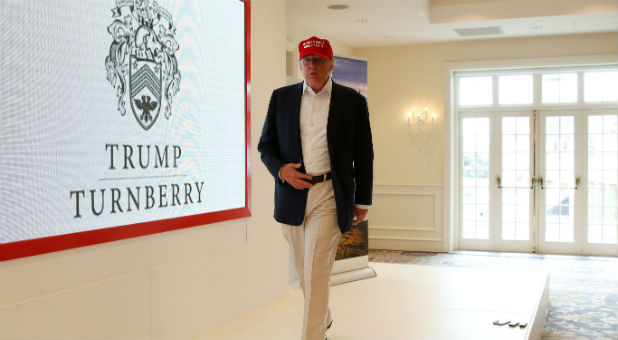 6/23/2016 DAVID BENHAM  charisma news
We met with Trump yesterday. This is what I woke up thinking. I’ve kept it raw and unpolished, so pardon some of my disconnecting thoughts.
We brought our dad and my oldest son to the meeting in New York City. We were like a microcosm of the greater culture, from Millennial to X’er through Boomer.
As we debriefed at the airport on the way home, my dad said God could use Trump to shake up America. My son said Trump was fake and dodged the tough questions. But something wasn’t sitting right in my spirit, and I couldn’t really put a finger on it … until this morning.
The church’s identity rests not as a voting block but as a voice for truth—”the pillar and foundation” of it, actually (1 Tim. 3:15). In the early years of the Moral Majority, Christians chose to elect only leaders with a biblical worldview and good character. While this is noble and helped elect many godly leaders, I believe it has become an identity in the evangelical community over the years. Today, it seems the main thrust of the evangelical voice surfaces primarily during election season. So we try to gather in unity around the most electable leaders, like Donald Trump, who simply pander to us to get our vote.
Voting is vitally important—I get it. As a citizen of heaven I am commanded by God to be a good citizen on earth (Golden Rule, salt and light, give to Caesar, and so on), so voting is my duty as an American—but it’s not my identity as a Christian. Whether Hillary or Trump is in the White House, my mission remains the same. I am an ambassador of Christ transforming the culture around me through the life-changing power of Jesus (2 Cor. 5:17-20). I should be God’s agent of change, bringing lives, marriages, families and culture back to God’s best for human flourishing. If the checkbook is out of balance it simply needs to be reconciled, which is where culture is today.
In light of this, the Christian’s first instinct should be to listen to the Spirit, not look for a strategy. While the Holy Spirit often gives good strategy, sometimes what He speaks doesn’t seem strategic at all. Think of Jeremiah’s message to Israel against an alliance with Egypt to protect them from war and famine (Jer. 42). Consider Noah’s call to build an ark … when no one had even heard of rain before (Heb. 11:7). Remember Christ—our King—was born in a feeding trough and killed on a wooden tree. Do we see as God sees? It takes spiritual eyes, not strategic ideas.
For decades the evangelical community has strategized to the hilt to affect culture through elections. Yet, in my opinion, we’ve missed what the Spirit has been trying to say for quite some time. Again, I’m all for working hard in elections, but I believe the Spirit is speaking and we should listen. So while sitting in the Trump meeting I bowed my head and quietly prayed, “Lord, what are you saying here? What do you want to hear from us?”
I instantly felt the whisper of the Spirit to read Psalm 106 as a message for this group of leaders:
“”But they mixed among the nations and learned their deeds; they served their idols, which were a snare to them. Yes, they sacrificed their sons and their daughters to demons, and poured out innocent blood, even the blood of their sons and of their daughters, whom they sacrificed to the idols of Canaan, and the land was polluted with blood. Thus were they defiled by their acts and acted like whores with these actions.
“Therefore the wrath of the Lord was kindled against His people, and He abhorred His own inheritance. He gave them into the hand of the nations, and those who hated them ruled over them. Their enemies also oppressed them, and Israel was brought into subjection under their powerful hand. Many times He delivered them, but they were rebellious against Him with their counsel, and were afflicted for their iniquity.
“Nevertheless, He regarded their affliction, when He heard their cry: and He remembered on their behalf His covenant and relented according to the greatness of His mercies. He made them pitied among all those who held them captive” (Ps. 106:35-47, MEV, emphasis added).
I believe the distress that has come upon us in this nation is meant to generate in the Church a genuine cry of repentance—a true spiritual revival. We’ve filled our land from sea to shining sea with the innocent blood of the unborn, and we’re prostrating ourselves before idols of every kind. As a result, leaders that hate us, and everything about us, rule over us.
Spiritually speaking, the Lord healed the brokenness of the nation when His people cried out to Him. And until we get to this point as Evangelicals in America, no amount of strategy around Trump, or any other leader, is going to fix it. The distress and darkness is going to continue.
Interestingly, after Trump spoke we listened to a panel of leaders from across various spheres of influence give their thoughts, and the common theme was how we have to stand against the horrific leaders we have in our nation, especially Hillary. I couldn’t help but re-read Psalm 106, realizing that a spiritual cry of repentance is needed long before a strategic call to Republicans.