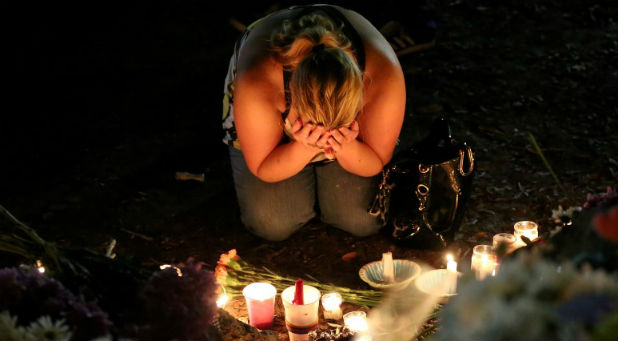 6/20/2016 JESSILYN JUSTICE  charisma news
Join us on our podcast each weekday for an interesting story, well told, from Charisma News. Listen at charismapodcastnetwork.com.
After multiple tragedies in the greater Orlando area, pastor and musician William McDowell issued a prophetic word via Instagram.

I know most of you will not understand what in the world I’m talking about. As a resident of Orlando and a pastor in Orlando with a prophetic edge I feel like standing on top of the biggest thing I can with the loudest megaphone and shouting this as loud as I can!!! IT’S HAPPENING!!!!!!Those with a spiritual awareness will know exactly what I am talking about! If you do you’ll know exactly what and how to pray! That’s all I can say for now. I’m encouraged to see that intercessors, prophetic voices and those who are sensitive are beginning to sense out there what we have been seeing here in our city since the beginning of 2016! It’s happening! Everything is connected! I’ll stop now but I’m full and it’s hard to stay completely silent! There is a word from the Lord about all of this!

Many followers agreed with McDowell, who leads worship at Deeper Fellowship Church in Orlando.
One follower posted: “I spoke about this in choir rehearsal tonight… Recognize the spirit in the land… Then PRAY!”
Another wrote: “Yes pastor!!! The Time and season now to pray and fast. We as the church must wake up now and understand what’s happening in the Spiritual realm. What happened in Orlando this past week with 3 major tragic (sic) was a sign. People in the world wouldn’t understand. We must spread the gospel more than ever now…”
Late last week, prophetic voice Barbara Yoder said Orlando was under attack because the enemy was granted a “legal entry point.”
And this week, Charisma Senior Editor Jennifer LeClaire issued a similar word:

Make no mistake, I am not suggesting that the events in Orlando are God’s judgment. That’s an ignorant and unfortunate assumption some people who call themselves Christians are making. I am only suggesting this: When we tolerate Jezebel—when we tolerate immorality and idolatry and the occult—we open a door for the enemy that God is not obliged to shut. Orlando is not the only city in America tolerating Jezebel. The church in America needs to repent and close the door on any agreement with this spirit right now.Was an antichrist spirit attacking Orlando? I believe so. Was witchcraft involved? Likely, given the Bible’s revelation on Jezebel and her witchcrafts (2 Kings 9:22). Discerning spirits is ultimately not a difficult task. Raising up governmental intercessors who understand how to legislate in the Spirit and use the keys of the kingdom to bind and loose (Matt. 18:18) is the greater challenge. But we can commit to doing it.