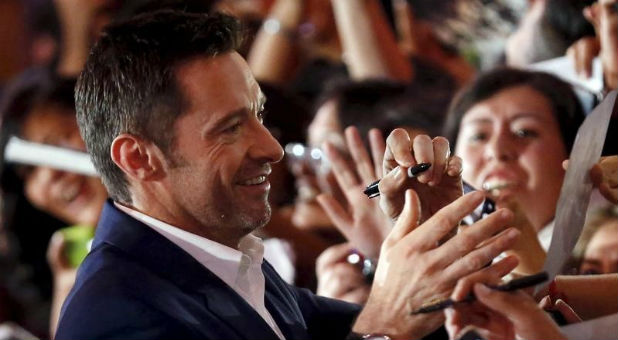 Hugh Jackman: I Am a Christian

4/21/2016 BEN KAYSER/MOVIEGUIDE  charisma news
Join us on the new C-Pop podcast where Taylor and Jessilyn discuss, debate and sometimes deride pop culture with a strong sense of humor and a focus on Christ. Listen at charismapodcastnetwork.com.
Many know Hugh Jackman grew up in a Christian home after his father gave his life to Jesus through a Billy Graham crusade. Until recently, it was believed that he did not share his father’s faith, until an interview with Parade Magazine published on Oct. 21. When asked about when he first knew he wanted to be an actor, Hugh Jackman responded, “I’m a Christian. I was brought up very religious. I used to go to different evangelists’ [revival] tents all the time. When I was about 13, I had a weird premonition that I was going to be onstage, like the preachers I saw.”
Made famous for his role as Wolverine in the popular X-MEN franchise, Jackman showed a more spiritual side with his transcendent performance as the redeemed by grace Jean Valjean in Movieguide® Award-Winning movie LES MISERABLES.
READ: Did Actor Hugh Jackman Just Have a Saul of Tarsus Moment?
A reputation as a committed husband to his wife of nearly 20 years and present father to their two adopted children, Jackman in many ways is a role model. Speaking of his marriage to Deborra-Lee Furness, “When I met Deb, I knew immediately I was going to marry her. I forced myself to wait six months because I thought, “Maybe it is infatuation. I’m too young to know.” It was ridiculous. Every day love just got deeper. I felt a complete trust with her to be exactly who I am. I don’t have to be any other version of Hugh Jackman for her to love me.” The Australian actor is also very active in various philanthropic endeavors, and he credits that to his religious background.
Speaking towards his acting, Jackman sees his performances as a way of honoring God. “I’m a religious person. This is going to sound weird to you. In Chariots of Fire the runner Eric Liddell says, ‘When I run, I feel His pleasure.’ I feel that pleasure when I act and it’s going well, particularly onstage,” Jackman said. “I feel what everyone’s searching for, the feeling that unites us all. Call it ‘God.’ Before I go onstage every night, I pause and dedicate the performance to God, in the sense of ‘Allow me to surrender.'”
Movieguide® commends Hugh Jackman for his bold proclamation of faith in the public sphere and in the many uplifting roles he plays.
This article originally appeared on movieguide.org. Want to know more about what God’s doing in Hollywood?