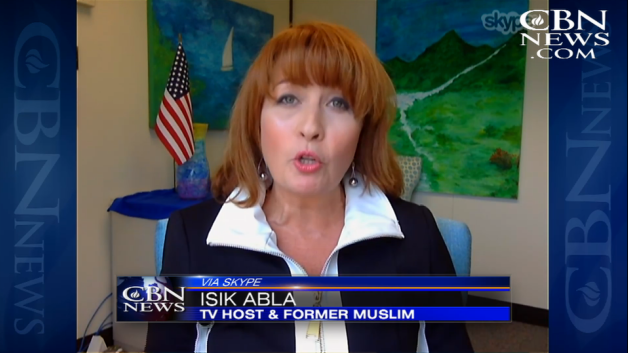 06-14-2016
CBN News Charlene Aaron
A former Muslim is speaking out online about the Orlando massacre and her Facebook post went viral with 1.2 million views.
Isik Abla is now a Christian TV host. She told CBN News that the Orlando attack should be called exactly what it was: radical Islam.
Watch the full interview with Isik Abla about what she says motivated her to write the post and speak the truth about Islam.
“Islam is a dangerous ideology, not only a religion and that Islam cannot exist without being radical,” Abla said.
“It is an ideology to destroy. It’s mission is to destroy America,” she added.
Abla said she posted the video about the truth of Islam as a wakeup call to America.
“This has been my heart’s cry and I have been so passionate since September 11 because this is the country that I found freedom. This is the country I found Christianity, I found Jesus Christ and I got free,” she said.
“When I was in my own country I had no voice I was less than a cow and in this beautiful free country I found freedom and I have a voice. And when this happened, I said, ‘No, no, no no, America cannot afford this anymore. America cannot afford one more September 11 anymore,'” she continued.
“And this is my heart cry to all Americans. Even atheists are writing to me, even Buddhists are writing to me and they are telling me ‘you are right.’ We need to open up our eyes. So this message is not just for Christians. This message is for true Americans,” she said.
Abla said Christians should respond to the Orlando tragedy and the homosexual community with more than just words of love.
“The world doesn’t need another description of the Christianity anymore. The world needs the demonstration of the Christianity and this is where we fail,” she said.
“And instead of getting all into this arguments and politics, if people just start loving people, sinners, and we are all sinners, with the love of Jesus Christ, until the point that they ask us ‘What is this? I want to be like you.’ Then you have the platform to tell them what Bible says about their lifestyle,” she said.
Watch here: Ex-Muslim Isik Abla
Love For His People, Inc. founded in 2010 by Steve & Laurie Martin. Charlotte, NC USA