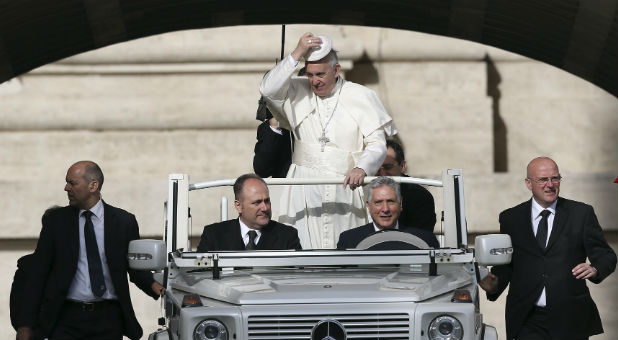 6/11/2016 JENNIFER LECLAIRE  charisma news
Join us on our podcast each weekday for an interesting story, well told, from Charisma News. Listen at charismapodcastnetwork.com.
Some of the most recognizable names in the charismatic movement had a private meeting with Pope Francis on Friday. Mike Bickle, Che Ahn, Kris Vallotton, Stacey Campbell and dozens of other Protestant leaders from North America and Europe gathered at the Vatican.
According to Bickle, director of IHOP in Kansas City, the purpose of the meeting was to engage in an on-going dialogue about the pontiff’s views on Jesus and Christianity.
“The meeting lasted a couple of hours. They gave us the opportunity to ask questions. The meeting was very warm and personal,” Bickle told Charisma News. “I asked him about his views on the serious error and deception of universalism that claims that ‘all paths lead to God’ and other religions being saved without receiving the grace of God that only comes through Jesus. He assured me that he believes that Jesus is the only way of salvation.”
Bickle asked him again pointedly, “Is Jesus the only way of salvation?” He described Francis as “very strong” in his agreement on Christ as the Savior of the World and emphasized his love for Jesus and the Scripture.
What about the pontiff’s controversial statement about Muslims and members of other world religions claiming “children of God” status? Bickle was told Francis was referring to all humans being children of the creator and children of Adam not “children of redemption.”
“The verse that was given to me was Matthew 5:44 describing the Father giving sun and rain to the just and unjust,” says Bickle. “He is unhappy with the views of some of the Catholic leadership who do not honor or value the faith of Protestant believers. He believes that a close relationship with Jesus is the only hope for the nations.”

Draw closer to God. Experience the presence of the Holy Spirit every month as you read Charisma magazine. Sign up now to get Charisma for as low as $1 per issue.
Has God called you to be a leader? Ministry Today magazine is the source that Christian leaders who want to serve with passion and purpose turn to. Subscribe now and receive a free leadership book.
Did you like this article? You’ll enjoy Jennifer LeClaire’s book, Mornings With the Holy Spirit: Listening Daily to the Still Small Voice of God
Love For His People, Inc. founded in 2010 by Steve & Laurie Martin. Charlotte, NC USA