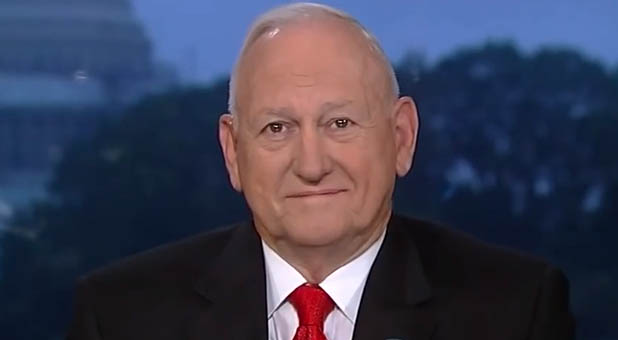 U.S. Army Lt. Gen. William “Jerry” Boykin (ret.) was removed as a guest speaker and the prayer breakfast at which he was to speak was rescheduled at Fort Riley, Kansas, after a “religious freedom” advocacy group complained. (Video Screenshot Image)

6/6/2016 BOB ESCHLIMAN  charisma news
A prayer breakfast to be held Monday at Fort Riley, Kansas, to help kick off the U.S. Army’s 1st Infantry Division’s “Victory Week” celebration was rescheduled over the weekend due to “a number of scheduling conflicts.”
The “scheduling conflicts” arose after Military Religious Freedom Foundation founder Mikey Weinstein complained that Family Research Council vice president Lt. Gen. William “Jerry” Boykin (ret.)—an original Delta Force member—was scheduled to speak at the event. According to the Army Times, Weinstein sent multiple emails to 1st ID commander Maj. Gen. Wayne Grigsby on behalf of his advocacy group demanding the leader “immediately withdraw” Boykin’s invitation.
Although 1st Infantry Division spokesman Master Sgt. Mike Lavigne told the newspaper the event would take place “at a later date,” Boykin will not be taking part in the event. That news did not sit well with the Rev. Franklin Graham.
“Wow—they just won’t leave [Boykin] alone! Now he’s been abruptly ‘disinvited’ from speaking at a June 6th prayer breakfast for the Victory Week celebration at Fort Riley, Kansas,” he wrote on Facebook. “Anti-Christian bully [Weinstein] got word about it and, once again, put up a stink.
“He called Boykin, who is one of the original members of our country’s famed Delta Force and a national hero, all kinds of names—’homophobic, Islamophobic, fundamentalist Christian extremist.’ As a result, the military base canceled the prayer breakfast and said they would pursue a different speaker and reschedule ‘in an effort to ensure everyone in our broad and very diverse community feels welcome at any event on Fort Riley.’
“That’s just sickening. It is unbelievable that our country has fallen to this point and that Christianity is the only thing it’s okay to be intolerant of and discriminate against. Excuse me, General Boykin’s first amendment rights still exist, and so do those of everyone who wants to hear him speak.”
Graham urged his audience to call the Fort Riley Public Affairs Office at (785) 239-8851, or to lodge a complaint electronically at the base’s website.