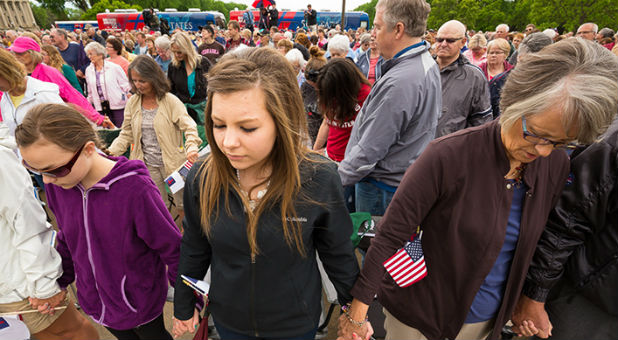 5/27/2016 JOY ALLMOND/BGEA  charisma news
Join us on our podcast each weekday for an interesting story, well told, from Charisma News. Listen at charismapodcastnetwork.com.
At the 26 Decision America prayer rallies to date, many have been asked, Why are you here?
The answer is often one form or another of, “I’m concerned about the next generation.”
And so is Franklin Graham.
“Daniel, in the Bible, lived in one of the most heathen, pagan countries in the world, but became prime minister under seven kings and two empires,” Franklin said from the steps of the North Dakota State Capitol in Bismarck on Wednesday.
“We need Daniels today.”
Several teachers at Williston Trinity Christian School are doing their part in raising “Daniels”—godly people who will stand up and stand out in a secular society.
When Lois Johnson, the 7th grade Bible teacher, heard Decision America was coming to her state, she knew it would be worth the four-hour drive from Williston.
“I just see the need for prayer in our country,” she said. “I thought it was a great opportunity for our students to experience this, especially since it’s such a pivotal year in America.”
Word got around that Johnson planned to bring her Bible class; before long, the entire middle school was planning a field trip.
Some of the parents—and even the school’s principal—came to stand with roughly 3,100 other North Dakotans.
“It is very special—in our country—to have this opportunity,” said principal Cory Fleck.
“We are also aware that these freedoms could be taken away from us. I think that’s why I felt the importance to come here. And if the students don’t understand their rights as Americans—and as Christians—we’ll be overrun, eventually,” Fleck said.
As a social studies teacher, Angela Nible wanted her students to exercise the freedom they have as Americans to attend a public prayer rally and remind them of the blessings of choice when it comes to education.
“It’s so important to have educational options—whether it’s public school, Christian school or home school,” Nible said.
“And to be able to come together like this and meet with the whole family of God is a freedom I don’t take for granted,” she added. “I hope this freedom continues. It’s really important.”
Nible’s colleague Traci Shirk wanted Wednesday’s rally to remind the students that God is ultimately the only reason America is free and blessed.
“We talk a lot about politics, and we study the history of our country,” Shirk explained. “But we as Christians need to define who we are. Our founding fathers were Christians.
“We need to speak up and remind (the students) that our country is founded on faith and that’s what will keep us strong, and that’s what will keep our country blessed. These students need to experience what it’s like to pray for our country, represent our country and have a voice for our country and our God.”
Andrea Black, a 5th and 6th grade Bible teacher, said another benefit of the Decision America Tour rally was giving students a closer look at the life and ministry of Billy Graham.
“I have talked about Billy Graham in class, and I explain to the students that he has lived an uncompromised life of ministry,” Black said.
“When someone can live that long and not compromise, we should listen to what he has to say,” she added. “And now, to see his son here carrying on that legacy is a wonderful thing.”
Black’s hope after attending the Decision America Tour is that her students will be encouraged to be more than “Daniels.” She wants to see them raise believers who will carry the torch of faithfulness—just like Billy and Franklin Graham.
“I want them to understand their parents have put them in a Christian school because it’s important to them,” she said.
“It’s up to them to carry on that legacy to the next generation.”

This story originally appeared on BillyGraham.org.
Draw closer to God. Experience the presence of the Holy Spirit every month as you read Charisma magazine. Sign up now to get Charisma for as low as $1 per issue.
Has God called you to be a leader? Ministry Today magazine is the source that Christian leaders who want to serve with passion and purpose turn to. Subscribe now and receive a free leadership book.
Love For His People, Inc. founded in 2010 by Steve & Laurie Martin. Charlotte, NC USA