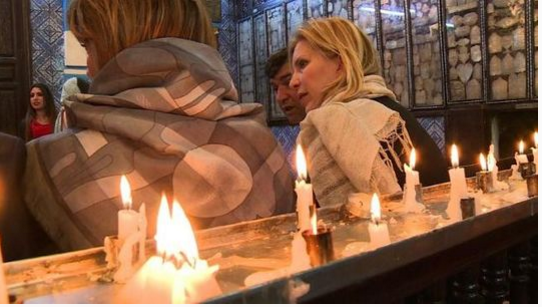 Your content will be available in 10 seconds
An annual Jewish pilgrimage to Africa’s oldest synagogue got under way in Tunisia where security forces were deployed heavily to ward off potential jihadist attacks.Video provided by AFP Newslook

(Photo: Kristen McTighe, Special for USA TODAY)
50CONNECTTWEET 3LINKEDIN 18COMMENTEMAILMORE
DJERBA, Tunisia — Despite warnings from Israel to avoid traveling to one of the Arab world’s last Jewish communities, thousands came to the ancient El Ghriba synagogue this week to celebrate the Jewish festival of .
Jews from Tunisia, Europe and elsewhere made the annual two-day pilgrimage that began Wednesday under tight security to mark the holiday with prayers, candles and wishes written on eggs.
Organizers estimated 2,000 people made the trip here despite a severe warning by Israel’s National Security Council Counter-Terrorism Bureau that recommended all travel to Tunisia be avoided.
“Terrorism is everywhere, it’s in Paris, it’s in Bardo. The problem is worldwide,”  Lior Elia said in his family jewelry shop in , the main city on the island of off the Tunisian coast.  “We are protected here, the police work for us and for everyone, and we are also protected, thanks to God.”
“We protect each other always,” said Madji Barouni, a Muslim college student who stopped by the shop to visit his friend Elia.
There have been plenty of security concerns. In an assault in March, militants affiliated with the Islamic State stormed the Tunisian border town of , leaving more than 50 dead. Access to Djerba was immediately cut off.
Two high-profile attacks last year in Tunisia — at the  in Tunis and in the beach resort of  — stoked fears that the Jewish community could become a target of extremists.

A member of the Tunisian special forces stands guard near the Ghriba synagogue on the Tunisian resort island of Djerba during the annual Jewish pilgrimage May 25, 2016. (Photo: Fethi Belaid, AFP/Getty Images)
In 2011, the annual pilgrimage to  was canceled amid security concerns. Jewish cemeteries were vandalized, and several anti-Jewish incidents were reported. In 2002, al-Qaeda claimed responsibility for a truck explosion in front of the synagogue that killed nearly two dozen people, mainly German tourists.
To reassure Tunisian Jews, , leader of Tunisia’s Nahda party, recently sent a delegation to Djerba to tell the community it would be protected. The image of tolerance bodes well for tourism on this island, a popular vacation destination on the Mediterranean.
Security checkpoints sit at the entrances of Hara Kabira — the part of the island where most of Djerba’s Jews reside —  and plainclothes police patrol the neighborhood. Outside El Ghriba synogogue, police guard the entrance gate where visitors must pass through metal detectors and tight security checks.

Inside the El Ghriba synagogue, on the southern Tunisian island of Djerba. (Photo: Kristen McTighe, Special for USA TODAY)
Jews have been on Djerba for more than 2,000 years, living alongside Muslims and Christians in the center of the Arab world. As violent religious extremism engulfs the region around them, residents on this quiet North African island say they are resolute to stay.
“Thanks to God, we can live peacefully and without problems,” said Yousef Oezen, president of the Jewish community in Djerba. “There are marriages, the youth are having children. The Jewish community can live here, and we can grow.”
About 850,000 Jews  lived throughout the Arab world before the state of Israel was created in 1948. That number has dwindled to fewer than 4,500.
Jewish communities have virtually disappeared across North Africa and the Middle East, including , , Egypt and . But the Jews of Djerba have stayed. The population  is about 1,100. nearly half of which are younger than 20, Oezen said.
“They live alongside their Muslim neighbors, and they do so very well,” said Valerie Davis Allouche, Tunisia country director for the American Jewish Joint Distribution Committee, a humanitarian group that works with the community.  “Jewish and Muslim kids play together in the streets. They work alongside their neighbors. Co-existence is a working reality.”
“We are very secure,” Koudir Hania, the synagogue’s manager, said as he locked the doors to the holy site at the end of the day. “Calm, life is calm.”
Hara Kabira, in the heart of Djerba, is the largest of two Jewish neighborhoods on the island, where schoolboys wear kippas, or skull caps, and women wear scarves to cover their hair, as part of their religion’s Orthodox tradition.

Tunisian Jewish youths play in the streets of Hara Kabira, the main Jewish quarter of the Tunisian resort island of Djerba, after attending a ceremony at the Ghriba synagogue May 26, 2016. (Photo: Fethi Belaid, AFP/Getty Images)
They speak Arabic and Hebrew, and some know French. Men often work in jewelry shops in Houmt Souk, and women mostly stay home to raise families.
Though relations with Muslims and Christians are amicable, the community remains tightknit and insular — a way to resist assimilation and preserve traditions.
“We work together, we talk, we have a coffee, but we go home to our own homes at the end of the day,” Oezen explained. “Everyone has their own religion, we don’t mix these things.”
As the Muslim call to prayer echoed across the market on a recent Friday in Houmt Souk, Elia stood behind a jewelry counter and pointed to an employee in the small shop.
“I am Jewish, and he is Muslim,” he said. “We have worked together here for years, and our fathers worked together before that. We are very close.”