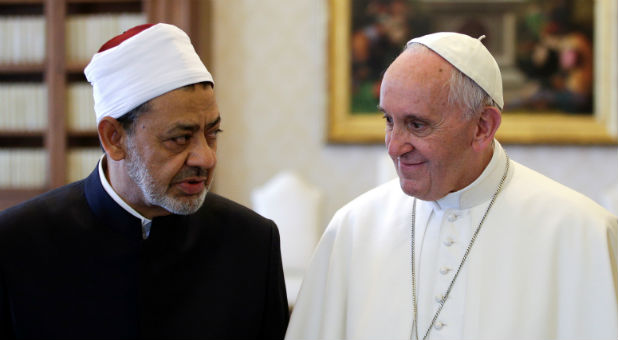 Did Pope Francis Really Take Another Step Toward a One World Religion?

5/26/2016 JESSILYN JUSTICE  charisma news
Join us on our podcast each weekday for an interesting story, well told, from Charisma News. Listen at charismapodcastnetwork.com.
Despite Pope Francis’ literal embracing of a top Islamic cleric and declaration that their “Meeting is the message,” his top aid said Christians must apply Matthew 28 to everyone, including Muslims.
“We have a mission to convert all non-Christian religions’ people [except] Judaism,” Cardinal Kurt Koch said. “And what is very important for us is that we can make mission only with a credible witness and without any proselytism.”
READ: “The Vatican Is Wrong: Jews Do Need Jesus”
The Jews are God’s chosen people, he continued. Christians should view them as a “mother” figure. But Islam and Christianity are vastly different.
“I don’t think that we have the same relationship with Islam that we have with Judaism.“It is very clear that we can speak about three Abrahamic religions but we cannot deny that the view of Abraham in the Jewish tradition and the Christian tradition and the Islamic tradition is not the same. In this sense we have only with Jewish people this unique relationship that we have not with Islam.”
Koch’s comments were reported the day after Pope Francis welcomed Sheik Ahmed el-Tayyib to the Vatican.
“If you have not see this video, it is one of the creepiest things that I have ever seen on YouTube. It has become exceedingly clear that Pope Francis believes that all major religions are completely valid paths to the same God, and there is virtually no uproar over this,” Charisma News’ Michael Snyder says of the Pope’s actions. “This just shows how late in the game we really are. The one world religion that was prophesied nearly 2,000 years ago in the book of Revelation is starting to come to life, and we are witnessing the events of the last days begin to unfold right in front of our eyes.”