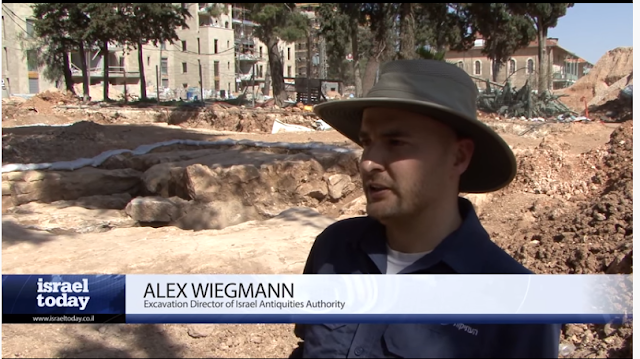 More Evidence of Jerusalem’s Glorious Past

Tuesday, May 24, 2016 |  Israel Today Staff
The IAA excavated the former Schneller army base ahead of the planned construction of residential buildings on the site.
Various discoveries were made during the dig, including a large winery from either the Roman or Byzantine period, around 1,600 years ago. Archaeologists found a white mosaic surface surrounding a pit that was part of the wine press used to extract juice from grapes.
Eight structures around the press were probably used for storing grapes and possibly to blend wine. Archeologists surmised that the press was part of a large manor house whose residents may have traded in wine.
“Whenever one turns over a stone, ancient artifacts will be found related to Jerusalem’s glorious past,” said archaeologist Alex Wiegmann, excavation director on behalf of the IAA. “The archaeological finds discovered here help paint a living, vibrant and dynamic picture of Jerusalem as it was in ancient times up until the modern era.”
Remains of a bathhouse were also found, including terra cotta pipes used to heat the bathing facility and clay bricks stamped with the title of the Tenth Roman Legion, one of the four legions that took part in the siege and destruction of Jerusalem in 70 CE. Units of the legion remained garrisoned in the city until around 300 CE.
The close proximity of the Schneller site to the International Conference Center, where the remains of a large pottery and brick production center were previously found, led archaeologists to believe that Schneller was an auxiliary to the main site.
Excavations and investigations indicate that the remains of a Jewish community at the Schneller compound dated from the late Second Temple period, around the time of Jesus.
During its more recent history, the site housed the Schneller orphanage from 1860 until World War II. During the British Mandate its German occupants were expelled and it became a military base. In 1948 it was taken over by the Haganah — the precursor to the IDF — and it later became an IDF military base that was active until it was closed in 2008.

You can help us in the “battle for the truth” by supporting us in our new media effort!
SUPPORT OUR MEDIA PROJECT NOW!
Want more news from Israel?Click Here to sign up for our FREE daily email updates from ISRAEL TODAY.
Love For His People, Inc. founded in 2010 by Steve & Laurie Martin. Charlotte, NC USA