From Genesis to Revelation: Artist Unveils Mural of the Bible in Jerusalem

05-20-2016
CBN News Chris Mitchell
GERMAN COLONY, Israel — In Jerusalem, artist Patricia Solveson recently completed a daunting task: Over the course of several years, she painted the entire Bible.
Called the Jerusalem Wall of Life, the biblical mural is longer than a football field and portrays scenes from Genesis to Revelation, including Moses parting the Red Sea. 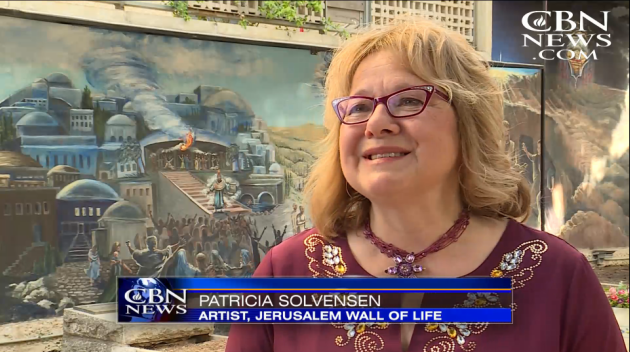 It took six years for Solveson to finish what she calls her life’s work.
“I’m probably more changed by painting this mural than anything else,” Solveson told CBN News.
“I was very relieved, very relieved. But I felt His heart. I felt the Lord’s heart of joy because He knows this is His place and His message can come forth,” she shared.
“In a place where the Good News has been quenched, very seriously quenched, here are the walls shouting out His name,” she said.

Creating the mural wasn’t easy.
“Such a vast job. It was just overwhelming — many, many times,” she said. “But then someone would come in. They’d be so touched and then I’d be revived again to keep going.”
Solveson completed the mural under the auspices of the Alliance Church in the Holy Land, which held a dedication service for the work.
“I think the mural is just a beautiful representation of our faith, of our hope, of the story,” said Marshall Mullinax, field director of the Christian Alliance Center.
The mural wraps around the walls of the Alliance Church cemetery in Jerusalem’s German Colony. Some may think it strange for this art to surround a cemetery. 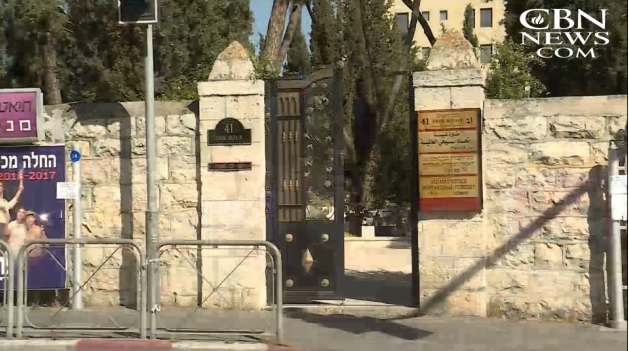 “Perhaps one of the least expected evangelistic platforms in the world, a cemetery,” Mullinax noted. “But we’re one of the few groups of people that actually don’t find cemeteries disturbing because our hope, our lives, our story doesn’t end with the grave.”
“We’re a people who can walk without fear because we know that death’s been conquered. We know that this is a stop in the story but it’s not the end of the story,” he said.
The cemetery, now an official Ministry of Tourism site, enjoys a rich heritage and history.
Rev. Jack Sara is vice president of Bethlehem Bible College and pastor with the Alliance Church.
“It’s great to have this place dedicated and especially putting this mural on the wall where they talk about the story of God through all the history and especially the story of salvation for all humanity,” he said.
Justina Steiner was in awe of the painting.
“The mural itself is just gorgeous and the colors and vibrant… and just the story depictions are really, really thought provoking,” Steiner observed. “Especially the end with the coming back of Jesus and the Lion and the Lamb… Yea, it’s really awesome.”
Solveson calls the artistic style ‘impressionistic realism.’ Her favorite scene? The Resurrection. 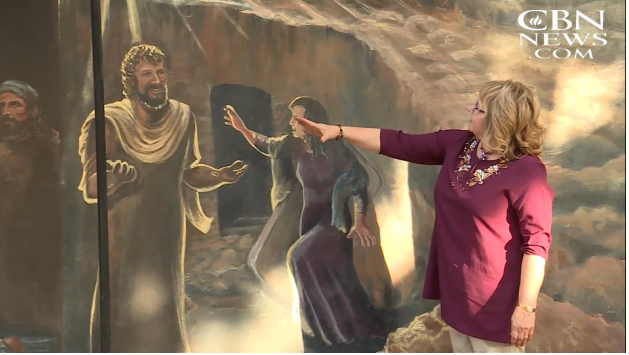 “Because Miriam, she thought this was the gardener and she said, ‘Where did you put His body? And He spoke her name and she had this love relationship with him. That’s the kind of relationship I have with him,” she told CBN News. 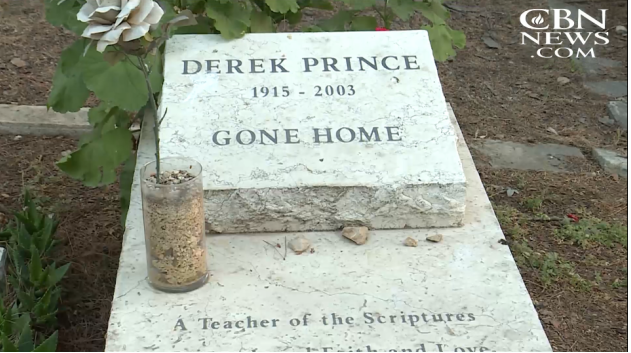 “But I also love the scene with the Lamb because it’s not a traditional Calvary scene, — it’s a scene, it’s a scene with the Passover Lamb, like when John the Baptist said, ‘Behold the Lamb of God who takes away the sin of the world,'” she said.
Solveson found inspiration from her own transformed life.
“Inspiration is a four letter word, L-O-V-E,” she explained. “Really because of the Lord who did for me what I could not do for myself–He took me out of this pit. He put a song in my mouth, a paintbrush in my hand and he said, ‘You’re going to live.'”
“It’s really a love story for all people, from all over the world,” she concluded. 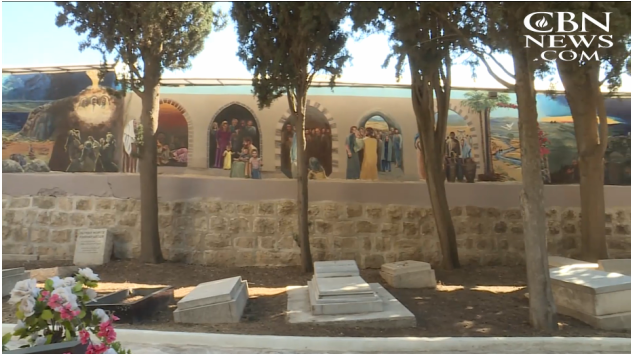