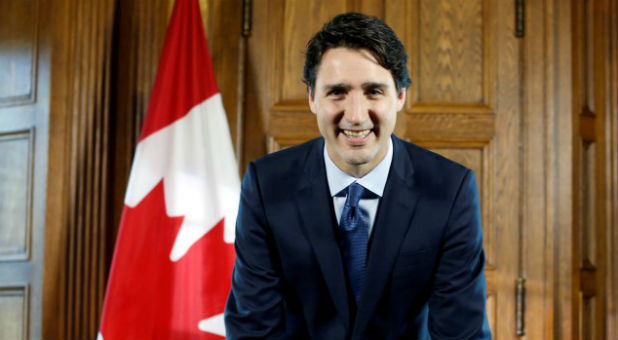 Canada Hopes to Jail People Who Stand Against Transgenderism

5/24/2016 JENNIFER LECLAIRE  charisma news
Jennifer LeClaire is now sharing her reflections and revelations through Walking in the Spirit. Listen at charismapodcastnetwork.com.
The slippery slope is slicker than we thought—and it could land Bible-believing Christians into a cold, dark jail cell. At least in Canada.
Prime Minister Justin Trudeau issued a troubling statement on the International Day Against Homophobia, Transphobia and Biphobia.
I agree, as he says, that everyone deserves to live free of stigma, persecution and discrimination. I agree, as he says, that all people—regardless of sexual orientation or gender identity—have the right to feel safe and secure, and empowered to freely express themselves. God gave us all a free will.
But that’s about where my agreement ends.
JOIN JENNIFER ON FACEBOOK FOR SPIRITUAL COMMENTARY AND ENCOURAGEMENT. CLICK HERE.
“As a society, we have taken many important steps toward recognizing and protecting the legal rights for the LGBTQ2 community—from enshrining equality rights in the Canadian Charter of Rights and Freedoms to the passage of the Civil Marriage Act. There remains much to be done, though. Far too many people still face harassment, discrimination and violence for being who they are. This is unacceptable,” Trudeau says.
“To do its part, the government of Canada today will introduce legislation that will help ensure transgender and other gender-diverse people can live according to their gender identity, free from discrimination and protected from hate propaganda and hate crimes.”
I am all for legal rights—but not special rights.
I am all for ending hate speech—but the Bible is not hate speech.
I am all for ending violence—but this bill of which Trudeau speaks may ultimately encourage violence against those who don’t embrace the LGBT lifestyle, and it will most certainly lead to persecution, discrimination and perhaps even jail time. Here’s a summary of the bill:
“This enactment amends the Canadian Human Rights Act to add gender identity and gender expression to the list of prohibited grounds of discrimination. The enactment also amends the Criminal Code to extend the protection against hate propaganda set out in that Act to any section of the public that is distinguished by gender identity or expression and to clearly set out that evidence that an offence was motivated by bias, prejudice or hate based on gender identity or expression constitutes an aggravating circumstance that a court must take into consideration when it imposes a sentence.”
It doesn’t take a prophet to see where this is headed. Christians need to speak up now before it’s too late.

Jennifer LeClaire is senior editor of Charisma. She is also director of Awakening House of Prayer in Fort Lauderdale, Florida, co-founder of awakeningtv.com, on the leadership team of the New Breed Revival Network and author of several books, including The Next Great Move of God: An Appeal to Heaven for Spiritual Awakening;Mornings With the Holy Spirit, Listening Daily to the Still, Small Voice of God; The Making of a Prophet and Satan’s Deadly Trio: Defeating the Deceptions of Jezebel, Religion and Witchcraft. You can visit her website here. You can also join Jennifer onFacebook or follow her on Twitter. Jennifer’s Periscope handle is @propheticbooks.
Draw closer to God. Experience the presence of the Holy Spirit every month as you read Charisma magazine. Sign up now to get Charisma for as low as $1 per issue.
Has God called you to be a leader? Ministry Today magazine is the source that Christian leaders who want to serve with passion and purpose turn to. Subscribe now and receive a free leadership book.
Did you enjoy this blog? Click here to receive it by email.
Did you like this article? You’ll enjoy Jennifer LeClaire’s book, Mornings With the Holy Spirit: Listening Daily to the Still Small Voice of God
Love For His People, Inc. founded in 2010 by Steve & Laurie Martin. Charlotte, NC USA