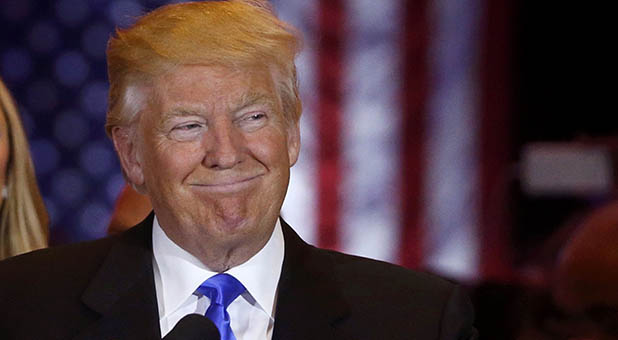 5/23/2016 TODD STARNES  charisma news
Donald Trump has agreed to meet privately with some of the nation’s most prominent Evangelical leaders—a meeting seen as critical to garnering support from social conservatives, Fox News has learned.
“Our goal is to be able to have a conversation that could lead to a better understanding of what Donald Trump has to offer to the country,” said Family Research Council President Tony Perkins.
Perkins is one of the key conservative leaders spearheading the gathering—set for June 21 in New York City. Perkins, along with Bill Dallas of United in Purpose, worked with Dr. Ben Carson to arrange the meeting.
As many as 500 conservative leaders from around the nation are expected to attend the invitation-only event.
The meeting was convened by a who’s who among evangelicals—including Southern Baptist Convention President Ronnie Floyd, James Dobson, Ralph Reed, Penny Nance, Bob McEwen, Tim Wildmon of the American Family Association, Kelly Shackleford of First Liberty and mega-church pastors Jack Graham and Ed Young.
“I want to be actively supportive of a candidate who can help turn this nation around,” Perkins told me. “With Trump, I’m not there yet. I hope to be there—but I’m not there right now.”
Perkins said Trump will not be delivering a speech. He will be there to answer questions. There will be no straw poll. There will be no endorsement from the conservative leaders.
“There is no preconceived outcome here,” he told me. “I’m hoping we can have a conversation that could lead to helping conservative leaders make a decision about what to do in this election.”
The meeting comes as a small but vocal number of Christian leaders are urging people of faith to stay at home on Election Day.
And that’s why Tony Perkins is worried.
“Our goal is to be able to have a conversation that could lead to a better understanding of what Trump has to offer to the country,” he said. “If we don’t try, the outcome is not going to be good.”
Specifically, the leaders want to hear detailed plans on potential Supreme Court nominees and the vetting process. They also want to hear about Trump’s policies regarding religious liberty, pro-life issues and possible vice presidential candidates.
“A vice presidential pick is going to be very crucial,” Perkins said. “Mr. Trump doesn’t have a track record—so I am going to rely very heavily on who he is going to pick as a running mate.”
Floyd, the president of the nation’s largest Protestant denomination, said he just wants to do the right thing.
“The vast majority of Southern Baptists are very much where I am today—we’re trying to figure this out,” he told me. “We’re trying to navigate through these waters that are very uncertain and very difficult.”
Floyd had strong words for Christian leaders who are suggesting voters should simply stay home.
“We cannot change what exists or even alter it or adjust it sitting on the sidelines and prognosticating about the situation,” he said. “We have a biblical responsibility, but we also have a responsibility as citizens of the United States to express the privileges afforded to us—that men and women have died on the battlefield to give us—and I’m not walking away from that.”
Floyd said the conversation with Trump is a way for Christians to share their hearts with him.
“None of us have endorsed Mr. Trump, nor have we condemned Mr. Trump,” he said. “This is about the possibility of being able to appoint the next four Supreme Court justices. This is about the dignity of human life from the womb to the tomb. This is about religious freedom. I’m not about to sit at home and not express something. I’m accountable to God, and I believe I’m accountable to my fellow Americans.”
But at the same time, he acknowledged that many people of faith are struggling to come to terms with some of Mr. Trump’s past statements—statements that are contrary to biblical teachings.
“Could you vote for him? That’s the question at hand,” Floyd said.

Todd Starnes is host of “Fox News & Commentary,” heard on hundreds of radio stations. Sign up for his American Dispatch newsletter, be sure to join his Facebook page and follow him on Twitter. His latest book is God Less America.
Draw closer to God. Experience the presence of the Holy Spirit every month as you read Charisma magazine. Sign up now to get Charisma for as low as $1 per issue.
Has God called you to be a leader? Ministry Today magazine is the source that Christian leaders who want to serve with passion and purpose turn to. Subscribe now and receive a free leadership book.
Did you enjoy this blog? Click here to receive it by email.
Love For His People, Inc. founded in 2010 by Steve & Laurie Martin. Charlotte, NC USA