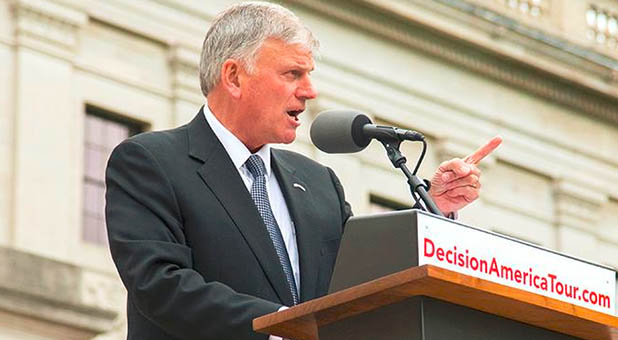 Franklin Graham: God’s Hand Is Being Removed From This Nation

5/23/2016 CBN NEWS   charisma news
Join us on our podcast each weekday for an interesting story, well told, from Charisma News. Listen at charismapodcastnetwork.com.
Evangelist Franklin Graham is urging Christians to vote this election year, even if “it’s for the lesser of two evils.”
Graham spoke to a crowd on the steps of the capitol in Lincoln, Nebraska. It was the 24th stop, nearly the halfway mark of his 50-capitol Decision America Tour.
“I have no hope for the Democrat Party … I have no hope for the Republican Party,” Graham told the more than 3,000 people at the event, the Lincoln Journal Star reported. “The only hope for our nation today is Almighty God. The most important thing we can do as Christians is pray. It is our only hope.”
Graham says believers should vote for candidates who at least consider their concerns. He says bringing God back into politics is an absolute necessity.
Between 1,000 and 8,000 people have met Graham at each stop on the tour, the purpose of which is to encourage Christians to pray and stand up for their faith.
“We are more concerned about political correctness than about God’s truth and righteousness,” he continued. “America is being stripped of its biblical heritage and God-inspired foundations.
Graham said secularism and communism “are one and the same.”
“Secularism is godless. Secularism is taking over our country. Every level of government is secular. It has crept in and taken root,” he said.
“The people who do this call themselves ‘progressives.’ Look at what they stand for and believe. They want to make us a godless country and a godless society,” he continued. “If we take God out, He will leave. He blessed us more than any nation on Earth, but his hand is being removed, and the only thing we can do is pray … and go vote.”

Reprinted with permission from CBN.com. Copyright The Christian Broadcasting Network, Inc., All rights reserved.
Draw closer to God. Experience the presence of the Holy Spirit every month as you read Charisma magazine. Sign up now to get Charisma for as low as $1 per issue.
Has God called you to be a leader? Ministry Today magazine is the source that Christian leaders who want to serve with passion and purpose turn to. Subscribe now and receive a free leadership book.
Love For His People, Inc. founded in 2010 by Steve & Laurie Martin. Charlotte, NC USA