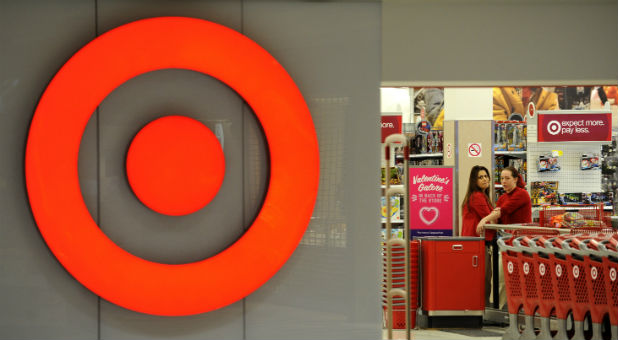 5/2/2016 FAMILY POLICY INSTITUTE  charisma news
Join us on our podcast each weekday for an interesting story, well told, from Charisma News. Listen at charismapodcastnetwork.com.
Target’s corporate stock has plummeted significantly this week, after a petition to boycott the store crossed 1 million signatures.
The petition and subsequent boycotts are a result of Target’s corporate campaign to open up bathrooms and changing rooms in their stores based on internal gender identity rather than biological anatomy. The new policy has sparked concern that predators will use the store’s policy to target others, specifically women, by claiming that they feel like a woman on the inside.
Last year, a biological man was arrested after allegedly secretly filming a woman trying on bathing suits in a Target dressing room in Missouri.
Recent polls have shown that Americans’ feelings toward open-bathroom policies have hardened significantly in the month of April, with support for the open-bathrooms concept falling by more than 20 percentage points.
Amid the turmoil surrounding the new policy and the immediate abuse of it in Missouri, the company’s stock fell from $84.10 per share on April 19 to roughly $79.36 as of Friday morning. That loss of $4.74 per share, if constant, would represent a corporate loss of over $2.5 billion.
The petition (you can sign it here) represents far more than just the 1 million people who have signed it. Not included in that number are the dependent consumers of those signers—mothers, fathers, husbands, wives and children—whose sustenance will no longer be found at Target. It represents the thousands of people who no longer have an interest in holding Target’s stock in their investment portfolio.
Most importantly, the petition represents the vast majority of Americans who are uncomfortable with trading their family’s safety and privacy for a politically correct solution to a problem that didn’t previously exist.