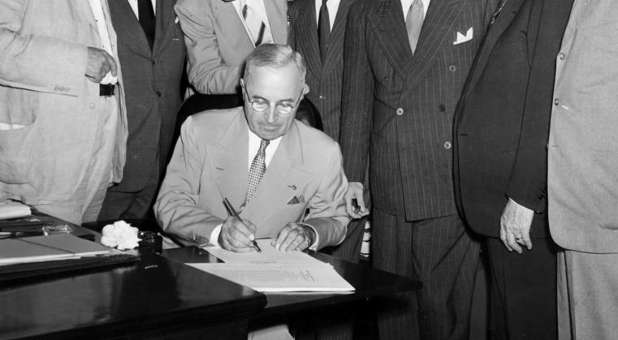 Why Hasn’t God Judged America Yet?

4/8/2016 RON CANTOR/FOR MAOZ ISRAEL  charisma news
A very good question is why hasn’t God already judged us as we deserve? Despite our massive moral failures over the decades, clearly God has not judged us according to our sins. There are several reasons for this, but this may be the biggest one:
Support for Israel from the day it was born. Harry S. Truman could not sleep on May 13, 1948. He kept seeing the face of the man who would be Israel’s first President, Chaim Weisman. Weisman had begged for his support in a previous meeting. Truman shared his feelings on the morning of the 14th with his top aide, Clark Clifford. Clifford said, “Mr. President, if you are going to recognize the Jewish State, you must do it today.” The president asked the Israeli consulate to send a request for formal recognition.
When Truman sent the letter to the diplomats, he didn’t even know the name of the new state that would be declared at 4 p.m. that day. The letter simply said “the Jewish state.”
At 9 a.m. (4 p.m. in the Middle East), it was announced in Tel Aviv that the new prime minister, David Ben Gurion, proclaimed that the Jewish state would be called the State of Israel. The president’s envoy caught up with the courier on the steps of the White House and the words “Jewish state” were scratched out and the word “State of Israel” was handwritten in its place.
Meanwhile, the anti-Jewish State Department was arguing another plan for the area, when the U.S.’s U.N. ambassador was given a note that Truman had recognized Israel. He angrily got up and returned to his hotel. The State Department led by General George Marshall was 100 percent against the idea of a Jewish State and had made that abundantly clear to Truman. It took great courage, but Truman did what was right.
This support for Israel undoubtedly brought the blessing of God on the United States as Genesis 12:3 declares that God will bless those that bless Abraham and his descendants and curse those who curse them.
Before America, it was Great Britain’s Foreign Secretary Lord Arthur James Balfour who fought in England’s parliament chambers for a Jewish state and God blessed Great Britain as the greatest power on earth. It was said that the sun never set on the British Empire, as she controlled lands from Africa to Hong Kong, from India to the Caribbean.
Yet the minute she turned on Israel in 1922, taking 80 percent of the lands she promised to Israel in the Balfour Declaration and instead created the Muslim state of Jordan, the sun began to set, and today Great Britain is a shell of her former self. In fact, how ironic is it—as Britain in 1922 chose oil over the Jews and the Muslim world over Israel that according to demographic experts, Britain is now in danger of being overrun with Islamic migrants.
So, while judgment on America has been held back, is there a limit? The question is, will we remember our calling as a world leader, protector and refuge for the persecuted, or will we reject that calling in favor of mediocrity, wickedness, socialism and protectionism?
It is time to repent.
It is time to rise up.
It is time to be who God called us to be.
“If My people, who are called by My name, will humble themselves and pray, and seek My face and turn from their wicked ways, then I will hear from heaven, and will forgive their sin and will heal their land” (2 Chron. 7:14).
Ron Cantor is the lead pastor of Tiferet Yeshua congregation in Tel Aviv, a Hebrew speaking outreach to Israelis. He is also the author of Identity Theft, Leave me Alone—I’m Jewish and his newest book coming out this spring, The Jerusalem Secret, a novel about the first Jewish believers. Ron blogs at messiahsmandate.org.
For the original article, visit maozisrael.org.