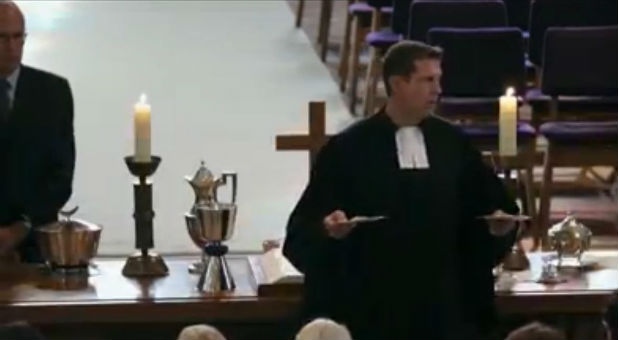 4/12/2016 DALE HURD/CBN  charisma news
Join us on our podcast each weekday for an interesting story, well told, from Charisma News. Listen at charismapodcastnetwork.com.
Germany was the birthplace of the Reformation and was once a base for world missions. But much of Germany today is covered by a profound spiritual darkness, as are most Western nations.
Those who refuse to compromise on the teaching of Scripture pay a price.
Bremen Pastor Olaf Latzel knows full well that there is a cost for speaking out boldly—especially in today’s Germany, where traditional Christian teaching is viewed by many as bigoted, hateful and even “un-Christian.”
Latzel has been attacked in the media, investigated by the local government, and even denounced by fellow pastors. His crime? Refusing to bend a knee to political correctness.
No Compromise
“I’m only preaching the gospel in a clear way,” Latzel said. “I think it is my duty to do this preaching in this way for our Lord.”
In his sermons, Latzel cuts no corners. He soft-pedals nothing. To some, he might sound mean when he attacks other religions.
But Latzel is standing against what he sees as a spirit of compromise that seems to have swallowed Germany and the German state church.
In the process, he has angered the German establishment and even a lot of German pastors.
Latzel said the chief battle in the German church today now is over who God is.
According to Latzel, some Christian pastors have said, “Allah and Jesus Christ, the Christian God, are the same god.”
“But if you ask a Muslim, ‘Does your god have a son?’ he would say no!” he continued. “Our (Christian) God has a Son; His name is Jesus Christ. So they are not the same.”
“If you speak out loud and clearly about the truth of the Bible, that there’s only one way to heaven and this way is Jesus Christ, there is only one God, the Father, Son and Holy Spirit, and there is no other god beside Him, then you have a problem,” he said.
READ: Hundreds of Muslims Convert to Christianity Amid Violent Persecution
Unsaved Pastors?
Seventy German pastors gathered in Bremen last year to denounce Latzel behind a banner celebrating “diversity.”
The public prosecutor investigated him for hate speech and then cleared him, and the Bremen parliament passed a resolution against him.
It was reportedly the first time a German pastor has been condemned by a German parliament since World War II.
But far from backing down, Latzel said the real problem is that, in his estimation, most pastors in Germany’s state church have not been born again.
“I think over 80 percent of the pastors in the national church in Germany are not reborn,” he said. “And that’s a great problem, and because of this, they make their own doctrine. The Bible is the Word of God; it’s our law, chapter by chapter, book by book, sentence by sentence, letter by letter.”
Latzel pastors at the historic St. Martini (St. Martin’s) Church in Bremen, where around 1679 the church’s pastor, Joachim Neander, wrote the great hymn, “Praise to the Lord, the Almighty.”
Latzel enjoys saying that Pastor Neander also got in trouble for preaching the gospel boldly.
Some pastors would have been rattled by so many attacks against them. But Latzel, who comes from a family with a long military tradition, said he is in a “war” between Christ and the devil, and the attacks reassure him.
“This is one sign that you are on the right way in your preaching, when you get problems,” Latzel said. “If you preach the gospel of Jesus Christ and everyone is clapping his hand, then you have a problem.”
“Because if you’re telling the truth from the Bible, then the devil will come and he will fight against you in several ways; he will fight against the Word of God,” he said.
A Tool in God’s Hand
In fact, Latzel admits his concern is not becoming discouraged but getting a big head.
“I (have received) more than 10,000 emails … so many persons came to me and said, ‘You are a great pastor,'” Latzel said. “And the more persons came and told me this, something happened inside me and, ‘Oh, I’m really this great pastor.'”
“And the devil comes here and says, ‘Yes, yes. You are great,’ and that’s not good,” he continued. “I am nothing. I am only a sinner. I am only a tool for Jesus Christ. And when Jesus can use this tool, give any honor to Jesus Christ. I am nothing.”
The great hymn of St Martin’s Church says, “Let the amen come from His people again.” Latzel believes revival is coming to Germany and he asks Christians to pray for his country.
“I ask you, brothers and sisters in America, please pray for Germany. Pray for awakening,” he pleaded. “Pray that the Word of Jesus Christ will go out and reach persons who are lost so that Jesus can save them.”