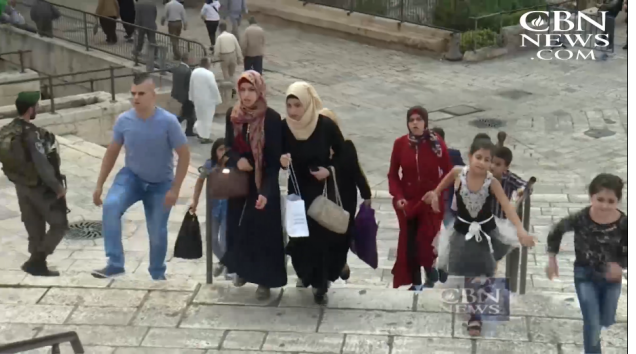 03-30-2016
JERUSALEM, Israel – America’s massive military won’t save it from Islamic terrorism if it doesn’t have the values and will to fight, an expert on Islam told CBN News recently.
If America and Europe want victory over radical Islam, they need to embrace their Christian roots, said Harold Rhode, a religious Jew with extensive experience in the Muslim world.
“The Christian world is a very powerful world if it chooses to be. It has enormous ‘abilitiesm,'” Rhode said. “I’m a religious Jew [and] I want you Christians – I want you to be Christian. I want you to believe in your values.”

America’s traditional Middle East allies have felt betrayed in the past several years. They point to weakness in President Barack Obama’s policies that have paved the way for the current chaos and violence.

Historically, when Muslims see weakness they pounce. America, the leader of the West, is showing weakness.
Rhode lived and studied in universities in the Islamic world for years. He advised the U.S. Defense Department on Islamic affairs for nearly three decades. He says the view of peace takes on totally different meanings between Muslims and the West.
“Peace in the West is let bygones be bygones,” Rhode explained. “Let’s say you and I had terrible problems in the past. We sit down, you give a little. I give a little. We shake hands. We don’t forget what happened, but we work together toward our new goals.”
But Islam is different.
“Revenge is the basis of everything,” he continued. “If you don’t avenge something, you lose personal honor. You are shamed. I am in a lower social position because of it. So there’s never peace. You do not let bygones be bygones.”
And what the West calls terrorism, Muslims see as classic Islamic warfare.
“Islamic warfare comes basically from the time of the Koran. They were tribes fighting tribes out in the desert…You raid the other side,” he said. “You take its property; you take its women, you take its children. Your goal is to make the other side afraid. You raid and withdraw. Now eventually, by making the other side afraid, they withdraw and you take their territory. That’s what terrorism is.”
But Rhode told CBN News America can fight it and win.
“America and Europe have unbelievable reserves of awesome power, but we don’t seem to have to stomach now to use it,” he said. “Power, without the will to use it, is irrelevant and that’s how the West is acting now.”
One recent example came when Iran captured American sailors after accusing them of breaching its territorial waters.
“And America did nothing. Excuse me, when Iran gave them up and got its propaganda value from them, Secretary of State Kerry [said] ‘Ohm thank you. See, being nice helps.’ This was shameful on the American part,” Rhode said.
If Washington would stand tough, he said, many Muslims would cheer.
“You would be surprised, the amount of Muslims that would say, ‘Thank God!’ Would they say it publicly? Not in the beginning because they’d be afraid that they’d be killed by fellow Muslims,” he said.
According to Rhode, that’s where Americans need to return to its roots.
“I don’t believe in Jesus. I’m a Jew, but I want Christians to believe in Jesus. I want them to observe Christian values. With that, our America is safe. Europe is safe. Israel is safe,” he said.
“The world will be safe because America will stand up for the values of the founding fathers of the United States,” he continued. “They based America on the values of what the Christians called the Old Testament, and we call, what we Jews call the Jewish Bible.
Watch here: CBN News Interview
Love For His People, Inc. founded in 2010 by Steve & Laurie Martin. Charlotte, NC USA