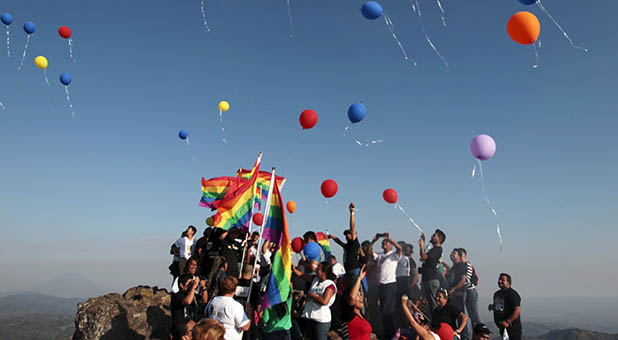 America Is Dying One Weak-Willed Governor at a Time

According to the Founders, government has been established, not to give us rights, but to secure the unalienable rights given to us by God.
Among these rights are religious liberty. In fact, according to the First Amendment, the free exercise of religion is the very first right government is pledged to guarantee and protect.
Somebody needs to send a copy of that amendment to Georgia Gov. Nathan Deal, a Republican and self-identified Southern Baptist, who evidently has forgotten all about it. In so doing, he has vetoed away what is left of religious liberty in the Peach State.
Gov. Deal is the poster child for how we are losing America: one cowardly governor at a time. One after another, we have seen supposedly principled governors cravenly cave to the bullies and bigots of Big Gay. The Gay Gestapo has claimed another victim in Gov. Deal and every freedom loving Georgian will pay the price.
Gov. Deal has vetoed a religious liberty bill that is about as mild a bill as you can imagine. It would have protected pastors from being forced to perform same-sex weddings, and churches and other faith-based organizations from being forced to rent out their facilities for wedding ceremonies which celebrate the infamous crime against nature.
Thus Gov. Deal is now on record declaring to one and all that he doesn’t mind if a Southern Baptist pastor is compelled by government to officiate a gay wedding or get punished in the process. He’s just fine with a church or a Christian school being ordered by government to rent its facility for a gay wedding or to a homosexual activist group, or else.
In other words, Gov. Deal, as Indiana Gov. Mike Pence did before him, has abandoned any pretext of protecting Christians from discrimination in his state. As one lawmaker bluntly put it, “It’s open season on people of faith” in Georgia.
The bill had been virtually eviscerated before it even got to the governor’s desk. Even if the governor had signed it, it would have provided no protection at all for Christian vendors who exercise their constitutionally guaranteed right to the free exercise of religion in the way they run their businesses. Christian bakers, florists, photographers, T-shirt makers and so forth are now officially left high and dry in Georgia, abandoned by the very official who has taken an oath before God to protect them.
About all that was left in the bill was protection for what pastors and churches and faith-based organizations do inside the four walls of their own buildings. Now even that protection has vanished like a whiff of smoke and the governor has left them without a shred of legal protection.
The governor piously claimed, “I do not respond well to insults or threats,” and then vetoed the bill after Coca-Cola, Netflix, Apple, Time Warner, Marriott, Walt Disney and the NFL rattled their sabers.
The governor is right. He does not respond well to insults and threats. He folded like a cheap accordion at a Lawrence Welk concert.
As Todd Starnes put it, he “was more interested in protecting the Almighty Dollar than he was protecting followers of the Almighty.”
If you want a three-word Snapchat to explain why we are losing America and why the Republican Party is being abandoned in droves by people of principle, here it is: Governor Nathan Deal.
Bryan Fischer is the host of the two-hour weekday radio program “Focal Point” on American Family Radio.