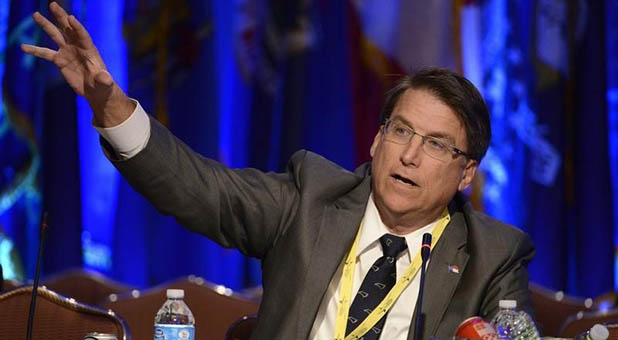 3/28/2016 BOB ESCHLIMAN  charisma news
Friday, the Rev. Franklin Graham was among the first to congratulate North Carolina Gov. Pat McCrory to signing into law a bill that reversed the City of Charlotte’s transgender bathroom ordinance.
Now, he’s coming to the Tar Heel State’s defense against what he claims is “media distortion” over what the state law does and doesn’t do.
“They did the right thing in killing that bill,” the evangelist wrote on Facebook Friday evening. “Charlotte’s mayor and City Council voted to allow people to use a restroom or locker room that did not match their biological identity. We all know that’s ridiculous—and dangerous. I’m glad North Carolina has a governor who will stand up for what is right and protect our children.
“Now he’s facing harsh criticism by LGBT orchestrated voices. He’s facing threats of backlash by big business, and of course his political opponents want to use this to their advantage. We can’t bow down to economic threats that risk the protection of our citizens and go against common sense and morality. Government should not mandate men being able to use a women’s public restroom based on their felt ‘gender identity’ of the day.
“LGBT activists are letting their voices be heard. We need to let the voice of common sense be heard as well. Write your newspapers editor and post on your social media about your support of what Governor McCrory and lawmakers in Raleigh have done–don’t be silent.
“Pray for our local, state, and national officials that they will have the back-bone to make the tough decisions that are needed–and stand by them. And let Governor McCrory know in the comments below how much you appreciate his strong and courageous stand on this issue.”
On Saturday, in response to news reports that San Francisco, Calif., Mayor Ed Lee was prohibiting city employees from traveling to North Carolina as a result of the legislation, Graham once again came to the state’s defense. Linking to a press release from McCrory’s office, the president of the Billy Graham Evangelistic Association wrote:
“San Francisco Mayor Ed Lee says he is banning all city employees from job-related travel to North Carolina in protest of the action NC Gov. Pat McCrory and the General Assembly just took to preserve basic privacy and protect its citizens from perverts and sexual predators. Can you believe it?
“I think Mayor Lee needs to focus on the problems of San Francisco—which are many—and leave NC to our governor to manage. He and others who are threatening NC with all kinds of boycotts really need to get their facts straight rather than believing the misinformation promoted by the Progressive Left.
“The measure just passed doesn’t allow discrimination at all. Check out the real facts in this link for a dose of reality. These issues are facing many states, and we need to stand up for what is right.
“I’m so thankful NC has a governor and a majority of legislators at the capitol who have some backbone and aren’t being pushed around by the dangerous whims of LGBT activists. I hope every pastor in every church across this country will pray for Gov. McCrory and these issues in their services tomorrow—and that they will stand against the onslaught on morality and God’s truth in our nation.”