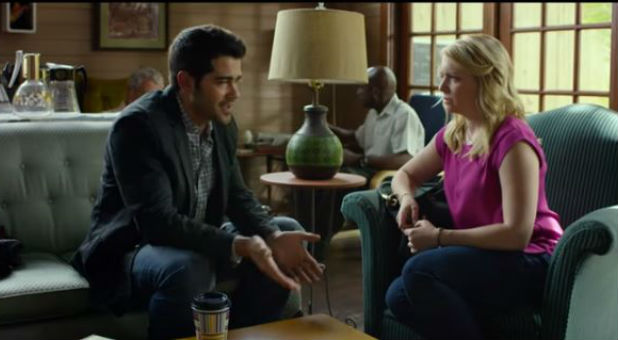 Jesse Metcalfe: I Found God When I Sobered Up

3/23/2016 JESSILYN JUSTICE  charisma news
Join us on the new C-Pop podcast where Taylor and Jessilyn discuss, debate and sometimes deride pop culture with a strong sense of humor and a focus on Christ. Listen at charismapodcastnetwork.com.
Jesse Metcalfe plays the defense attorney for a teacher accused of promoting her faith in school in the new film God’s Not Dead 2, due out next month. Melissa Joan Hart is the educator, put on trial for answering a student’s question.
Both of them have used the film as a platform to talk about their personal beliefs.
While Metcalfe’s walk with God began in the last decade, Hart’s persisted her whole life.
LISTEN: Melissa Joan Hart Details How Her Faith Defines Her Life
“I didn’t have an ‘Ah-ha!’ moment, I don’t feel like I had a born-again moment,” Hart says during a C-Pop podcast interview. “It’s just been a steady snowball effect, I feel like.”
While the actress was raised Catholic, curiosity drove her to pursue more.
“As I had children and reached my 20s and moved to Connecticut and had a little bit more time where I wasn’t working, I was always searching for a Bible study group, and I found one in the last six years, and I’ve really just been able to dive into the Word and been able to study it and discuss it with other people and find a real fellowship community and sisters in Christ that I can pray with.”
She says this journey enabled her to grow in her walk with Christ, as well as with her family.
For Metcalfe, however, the story is a bit different.
To take on the character, Metcalfe knew he had to tap into something deeper—tap into God.
“Discovering my own faith and my own connection with God, I brought some of that emotional foundation to the character so the character would be really connected and really fighting for something on a deeper level and that the emotion would come through. It was a lot of preparation,” Metcalfe tells Fox News.
The actor’s journey of faith is a bumpy one, though, that didn’t come to fruition until he decided to sober up in 2007.
Metcalfe says it was prayer that got him through rehab then and the way Alcoholics Anonymous encourages a relationship with God that’s helping him now.
“A large part of that program is giving the will and character life over to God—or a God as you understand him—and prayer is also a big part of that program as well. I feel that that really helped me overcome a difficult time in my life and since then has really deepened and enriched my life in a lot of ways.”
See the stars in action next weekend when God’s Not Dead 2 hits theaters.