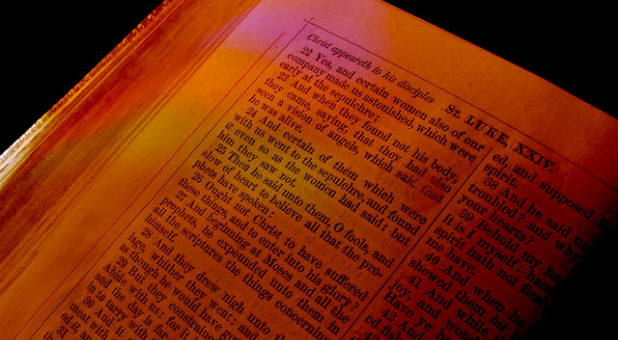 3/24/2016 JESSILYN JUSTICE  charisma news
Join us on our podcast each weekday for an interesting story, well told, from Charisma News. Listen at charismapodcastnetwork.com.
As millions celebrate the death and resurrection of Christ this weekend, a millenniums-old document proves the truth of the New Testament.
“What is noteworthy for our purposes here is that the Muratorian fragment affirms 22 of the 27 books of the New Testament. These include the four Gospels, Acts, all 13 epistles of Paul, Jude, 1 John, 2 John (and possibly 3rd John), and Revelation. This means that at a remarkably early point (end of the second century), the central core of the New Testament canon was already established and in place,” writes New Testament expert Michael J. Kruger.
According to Bible Researcher, the manuscript in which it appears was copied during the seventh century, the list itself is dated to about 170 because its author refers to the episcopate of Pius I of Rome (died 157) as recent. He mentions only two epistles of John, without describing them.
Other historical evidence proves the reality of the Gospels, especially, as well.
“Now there was about this time, Jesus, a wise man, if it be lawful to call him a man, for he was a doer of wonderful works, a teacher of such men as receive the truth with pleasure. He drew over to him both many of the Jews and many of the gentiles,” writes Jewish historian Josephus.
“He was the Christ and when Pilate, at the suggestion of the principal men amongst us, had condemned him to the cross, those that loved him at the first did not forsake him. For he appeared alive again the third day, as the divine prophets had foretold these and ten thousand other wonderful things concerning him; and the tribe of Christians, so named from him, are not extinct to this day,” Josephus wrote.
While the Muratorian fragment proves at least 22 books out of the 27, Kruger explains the missing five books.
“If there was a core canon from an early time period, then there are two significant implications we can draw from this. First, this means that most of the debates and disagreements about canonical books in early Christianity only concerned a handful of books. Books like 3 John, James, 2 Peter and so on. Early Christianity was not a wide open literary free for all, where there was no agreement on much of anything. Instead there was an agreed-upon core that no one really disputed,” Kruger writes. “Second, if there was a core collection of New Testament books, then the theological trajectory of early Christianity had already been determined prior to the debates about the peripheral books being resolved. So, regardless of the outcome of discussion over books like 2 Peter or James, Christianity’s core doctrines of the person of Christ, the work of Christ, the means of salvation, etc., were already in place and already established. The acceptance or rejection of books like 2 Peter would not change that fact,” Kruger says.