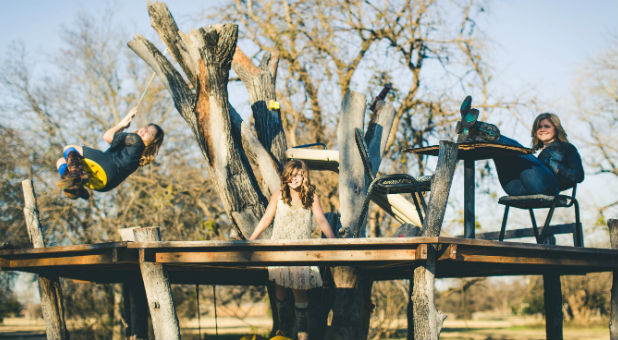 What God Told This Little Girl When She Went to Heaven

3/17/2016 JESSILYN JUSTICE  charisma news
Join us on our podcast each weekday for an interesting story, well told, from Charisma News. Listen at charismapodcastnetwork.com.
What do you do when your daughter lies dying in a hospital bed? How do you pray when she looks at you to say, “Mommy, I want to die and go to heaven and be with Jesus where there is no pain … you would kill yourself and go with me”?
Christy Beam’s heart broke in that moment.
“I felt sick, felt like throwing up,” Beam says. “What that meant to me wasn’t the loss of me, too, but it meant she had processed it, that daddy will be here to take care of other girls, they will be fine. She wasn’t going to go without me. It wasn’t a fleeting thought, it was a thought she had taken to process the execution. … It terrified me.”
The Beam family’s faith is chronicled in Miracles From Heaven by producers like T.D. Jakes and DeVon Franklin out now.
READ: ‘Miracles From Heaven’: The Film That Does Everything Right
Annabel Beam is a ray of sunshine for her family. The girl who plays the French horn because it has the same word as french fry is the second child for Christy and Kevin. Her story begins with a childhood diagnosis with life-threatening digestive conditions.
She was 4 when she started having “tummy toubles” as her mother called them, 5 when the nightmares of surgeries and going from doctor to doctor, hospital to hospital began. Each day, Kevin and Christy watched their mellow little girl fall deeper into herself, losing the vibrancy that used to envelop her.
It was during those hospital visits that Christy found her faith being challenged and her hope waning. At times, she was almost silent in her communication with God, afraid that His answer to her prayers would be “No.” And then the Lord spoke to her.
“You need to start reaffirming who you know God is, need to start praying for things in a way you know God can do,” Christy says. “He is a mighty God, an almighty and amazing God—not a vending machine.”
But God also spoke to Annabel, the girl says, and told her something astounding: “I believe that I was cured because whenever I went to Heaven I asked Jesus if I could stay with him and he said, ‘No Annabel, I have plans for you on Earth.'”
When Christy prayed for Annabel’s healing, it came about in a way that may have cost her life.
Annabel was climbing a tree with her sister one afternoon when she fell. And not just a little slip. Annabel tumbled 30 feet into a hollowed-out cottonwood tree. After rescuing her, the Beams made their way to the all-too-familiar hospital. Test after test revealed there was nothing wrong with Annabel—nothing including the subsiding of her debilitating illness.
That was in 2011.
The now 12-year-old is a source of joy for all who meet her, and not just because of her gratitude for life. She’s a deep thinker, Christy says, but the word “chicken” can send her into giggle fits.
But more than anything, Annabel is physical proof of God’s faithfulness.
“I really feel like God has called me to be hyper aware and encourage others to be aware, to not only recognize acts of faith by Christ in our lives, but realize what are our acts of faithfulness back,” Christy says. “What are we doing to show Him? … I feel like, we say God is faithful, I feel like that’s an adjective, and it should be a verb.”

For a limited time, we are extending our celebration of the 40th anniversary of Charisma. As a special offer, you can get 40 issues of Charisma magazine for only $40!
Has God called you to be a leader? Ministry Today magazine is the source that Christian leaders who want to serve with passion and purpose turn to. Click here to subscribe and to receive a free leadership book.
Love For His People, Inc. founded in 2010 by Steve & Laurie Martin. Charlotte, NC USA