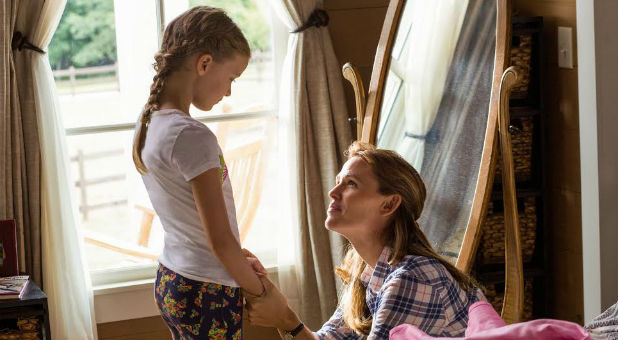 Miracles From Heaven: The Christian Film That Does Everything Right

3/14/2016 DEWAYNE HAMBY  charisma news
In the Bible, Christians are instructed to testify about the great things God has done, because they give Him glory while providing hope to those encountering similar circumstances. With that in mind, the newest faith-based film releasing during this Easter season shines bright at a time when so many in the world need that hope the most.
Miracles From Heaven is the latest release from producers T.D. Jakes and DeVon Franklin (Heaven Is For Real), along with Joe Roth, telling the story of Christy Beam, the mother of pre-teen Anna who suffers from a seemingly-incurable stomach disorder. The true account, chronicled in a previously-released book, is skillfully brought to the big screen by director Patricia Riggen (The 33).
Jennifer Garner (Alias, 13 Going On 30, Daredevil, Elektra) gives a career-defining performance as Beam, a woman at the end of her rope both spiritually and emotionally. She explores every medical option to alleviate her daughter’s pain, even traveling to Boston and tenaciously securing an appointment with a top children’s doctor, Dr. Nurko, played by Eugenio Derbez.
Along the way, Beam and Anna (Kylie Rogers) are befriended by Angela (Queen Latifah), who shows them around the city and provides some comic relief from the emotionally-charged film.
Miracles provides an insider’s view of a mother pulled between her longstanding dedication to God and the illness ravaging her daughter’s body. Beam prays for faith, even in the middle of intense doubt and despair. Things do not immediately get better, but even seem to get much worse, leaving her feeling even further removed from God, her church community and even her husband (played by Martin Henderson). Many viewers will feel and sympathize with Beam’s situation, having faced their own spiritual valleys.
It’s not a spoiler to report that God does indeed have a plan and it’s fully revealed before the end credits roll. Beam’s journey is astounding, even more when considering the true story it is based on. The takeaway is simple and inspiring—God is always at work, whether or not His actions are easily recognized.
Miracles From Heaven is being hailed by critics across the board as a Christian film that does everything right. As it attracts a national audience this week, the hope of Jesus Christ has an opportunity to penetrate millions of hearts outside the walls of church buildings.
Miracles From Heaven, written by Randy Brown and also starring John Carrol Lynch, releases Wednesday, March 16, from Affirm Films, Roth Films and Franklin Entertainment distributed by Columbia Pictures.
Dewayne Hamby is a longtime journalist covering faith-based music, entertainment, books, and the retail industry. He is also the editor of the White Wing Messenger, director of communications for the Church of God of Prophecy, and author of the upcoming book Gratitude Adjustment. Connect with him atwww.dewaynehamby.com or on Twitter – @dewaynehamby.

For a limited time, we are extending our celebration of the 40th anniversary of Charisma. As a special offer, you can get 40 issues of Charisma magazine for only $40!
Has God called you to be a leader? Ministry Today magazine is the source that Christian leaders who want to serve with passion and purpose turn to. Click here to subscribe and to receive a free leadership book.
Love For His People, Inc. founded in 2010 by Steve & Laurie Martin. Charlotte, NC USA