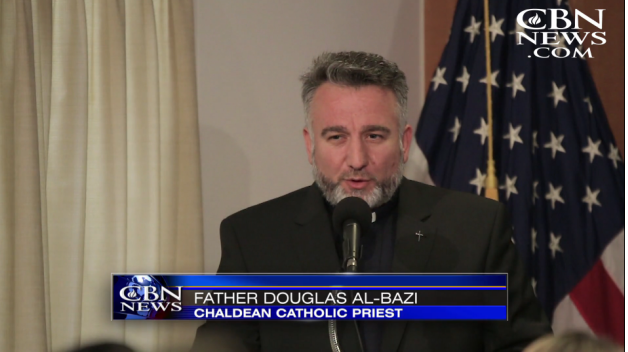 Former ISIS Captive: ‘My People Are Forgotten and Alone’
03-12-2016
CBN News
A prominent Catholic priest in Iraq, who had been held captive by ISIS for nine days, told reporters this week that his people are indeed suffering genocide at the hands of the Islamic terror group.
“I’m here to tell you that my people — they feel that we are forgotten and alone,” Father Douglas al-Bazi, a prominent Chaldean Catholic priest, testified at the National Press Club. “And I am here to tell the Americans the first right step should be taken is to call it a genocide.”
Al-Bazi addressed reporters during a press conference announcing the release of a new report backing up his claims.
The Knights of Columbus and In Defense of Christians released a 280-page report that contained significant information not available before.
That report includes “the most comprehensive information to date on Christians who have been killed, kidnapped, raped, sold into slavery, driven from their homes, and dispossessed, as well as on churches that have been destroyed,” according to a news release.
The report also includes “interviews with witnesses to the atrocities that were collected during a Knights of Columbus fact-finding mission to Iraq last month.”
“Genocide is a polite word,”  Al-Bazi said. “Can you figure another word actually to be a fit to what happened to my people?”
Al-Bazi said ISIS held him for nine days, beat him, and smashed his teeth with a hammer. His tormentors also used the hammer to break his nose and back.
“I still keep my shirt when they kidnapped me,” Al-Bazi shared, holding up his bloodstained shirt. “Still, I look to my blood every day and I remember: this is what happened to my people every day. I’m lucky; I still look to my blood and remember what about my people — they don’t have any more chance.”
Al-Bazi said he also had a pistol held to his head and went without water for four days.
Eventually he left his Baghdad home for safety in the Kurdish North. He now runs the Mar Elia Church, which shelters more than 112 displaced Iraqi families.
The U.S. State Department has a congressionally mandated deadline of March 17 to determine if ISIS is committing genocide against Christians and other minority groups.
To view the report from the Knights of Columbus and In Defense of Christians, click here.
To sign a petition urging Secretary of State John Kerry and America to “end its silence about the ongoing genocide against Christians and other minority groups in Iraq and Syria,” click here.
Love For His People, Inc. founded in 2010 by Steve & Laurie Martin. Charlotte, NC USA