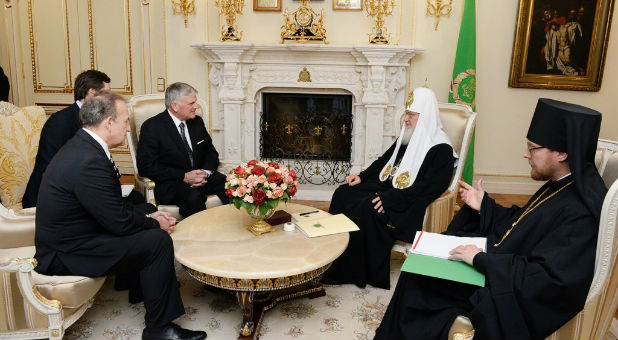 3/10/2016 BILLY GRAHAM EVANGELISTIC ASSOCIATION   charisma news
Join us on our podcast each weekday for an interesting story, well told, from Charisma News. Listen at charismapodcastnetwork.com.
Franklin Graham announced Wednesday that the Billy Graham Evangelistic Association will convene The World Summit in Defense of Persecuted Christians this October. It will be held in Moscow, Russia, Oct. 28-30 in cooperation with the Russian Orthodox Church.
“2015 was just reported in the media as the worst year for Christian persecution,” Franklin Graham wrote on his Facebook page Wednesday. “More than twice as many Christians were killed for their faith than in the previous year—making it the worst in history since these statistics have been tracked.”
Franklin Graham called Moscow “a fitting and meaningful location for this much-needed summit.”
“No church in modern history has suffered more than the church in Russia. In the years under Communist rule, virtually all of the priests, pastors, and church leaders in Russia were imprisoned or executed by the Communists, and their graves are on the outskirts of Moscow and throughout the country serving as a reminder.”
Franklin Graham visited Russia last fall. While there, he met with Patriarch Kirill, head of the Russian Orthodox Church, as well as evangelical leaders to discuss the persecuted church worldwide.
Franklin Graham cited a Feb. 16 interview with Patriarch Kirill, where the Patriarch said we need to “work together in order to save our society from de-Christianization. … Christians are being squeezed out of public life.”
Britain’s Prince Charles, Franklin Graham added, has also warned that Christianity could soon be wiped out of the Middle East—its birth place—with all the torture, beheadings and imprisonment people there face as a result of their faith.
“The World Summit in Defense of Persecuted Christians will shed a global spotlight on this crisis,” Franklin Graham wrote in his Facebook announcement. “We will bring delegates from around the world and will be able to join hands with people of other churches and denominations of the Christian faith to pray for our brothers and sisters in Christ and to hear firsthand reports of the suffering that is taking place.
“Will you pray with us for this historic summit?”

For a limited time, we are extending our celebration of the 40th anniversary of Charisma. As a special offer, you can get 40 issues of Charisma magazine for only $40!
NEW from CHARISMA: Do you want to encounter the Holy Spirit and hear God speak to you? Increase your faith, discover freedom, and draw near to God! Click Here
Love For His People, Inc. founded in 2010 by Steve & Laurie Martin. Charlotte, NC USA